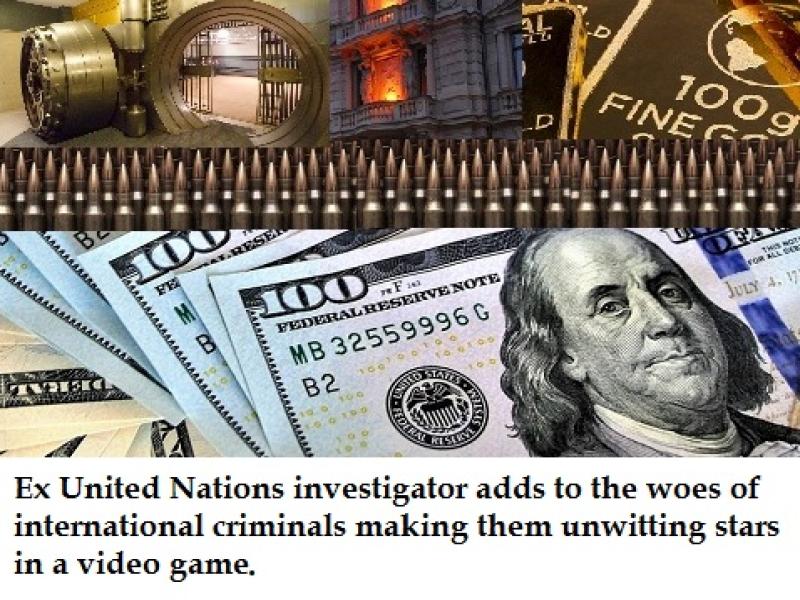 The sleuth behind the legal headaches of Czech billionaire Radovan Vitek, targeted in April in a billion dollar lawsuit filed as a racketeering claim is named Tom Creal and, of all things, besides pursuing his international work fighting crime by conventional means, he works his profession making video games. Creal is a seasoned forensic accounting warrior against notorious figures like Charles Taylor, the former president of Liberia and convicted war criminal, to the warlords in Afghanistan dealing in the opium trade.

He recently announced his latest offensive against black money lawbreakers with his new BLACK MONEY EYEBALLS 2.0 game to feature interactive software targeting real black money movers as the people to beat. It will also incorporate actual case information from money warlords of the terrorists and court cases such as the RICO filing.

Thomas Creal, whose company is Hunter Forensics decided to go outside the box in his approach to fight bad guys who have been using our technology and social media platforms to run circles around law enforcement.

Creal is also opening an office in Geneva, Switzerland which is ground zero in the international movement of cash-licit or otherwise. As he handles this task he'll be putting finishing touches on his Black Money Eyeballs game which is the latest iteration of his proudest assymetrical video gaming arsenal that puts shadowy figures and high profile individuals involved in questionable activity before millions of people. In Creal's words: "The best way to defeat the bad guys today, is through a game. Billions of people play games on their phones. This is perfect device to expose the bad guys for their black money history and to get the world involved in providing evidence. From the game, my FinOps team can package information, prepare the claims for damages, file civil actions or refer to country authorities for actions. It will become the new wave on how to investigate cases and seek relief and much faster!"

Creal has been tracing black money for over 35 years including his days at the United Nations as the sanction expert for tracking down the assets of Charles Taylor and his circle of warlords, involved in the looting of Liberia that led to Taylor's conviction of war crimes. Creal was also deeply involved in other missions such as being the lead forensic accountant for Task Force 2010 in Afghanistan resulting in a seizure of $70 million of black money (leading to a write-up in the New Yorker); assisting the victims of the Christian Genocide in Syria and Iraq in seeking financial damages from aiders and abettors; and advising legal teams in the arrest of the Queen of Ivory in Malawi as a financier of the elephant poachers. In one of his most recent financial escapade stings Creal was given court approval to serve a Kuwaiti -Ajmj Hajjaj, involved with raising funds for the al Nusra Terrorist front-by sending him a Tweet on Twitter. When the tweet was sent out with the complaint attached, Hajjaj opened it and responded thus he was served!

Creal has recently released a video trailer featuring his video game 2.0 and expects to be involved in many missions pursuing black money traffickers for years to come. https://www.youtube.com/watch?v=vrE6SYlCUwc&feature=youtu.be

WHO: Coronavirus could spread to other countries "in coming days"

GENEVA, Switzerland - The World Health Organization (WHO) says the novel coronavirus could spread to other countries "in the coming ...

NEW YORK, New York - Fox News has doubled down on the impeachment of President Donald Trump, with its top ...

Caribbean and Latin America deadliest region in world for journalists

It has been a deadly decade for journalists across the world, however last year there was a glimmer of hope ...

BAGHDAD, Iraq - Two rockets have landed near the U.S. embassy in Baghdad located in the heavily fortified Green Zone, ...

Taking a look at the politicisation of antisemitism

LONDON, UK In 2004 Greg Philo and Mike Berry authored Bad News from Israel, a ground-breaking work for the Glasgow ...

SYDNEY, Australia - Stocks in Asia tumbled on Tuesday with fears about a divided America, ahead of the president's impeachment ...

AUSTIN, TEXAS - With China poised to increase purchases of U.S. agricultural goods this year as part of a Phase ...

DUBLIN, Ireland - Apple has been recognised as one of the greatest foreign direct investors in Ireland.The company on Monday ...