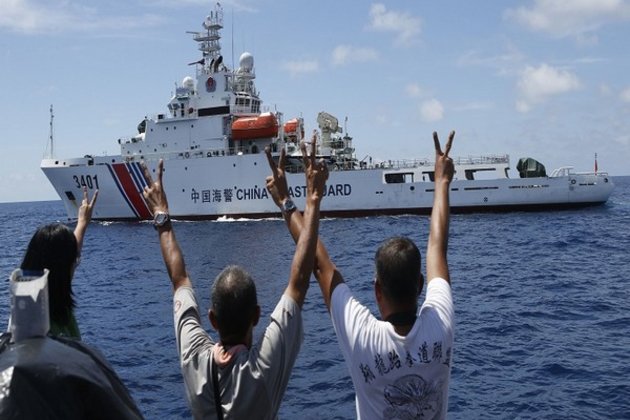 Manila [Philippines], January 25 (ANI): The Department of Foreign Affairs of Philippines told China on Tuesday that Filipino fishermen, driven away by the Chinese coast guard from the Philippines Ayungin Shoal, have the right to fish in the area and "take whatever they are due" under Philippine and international law, reported philstar Global.

This comes after the Philippine Coast Guard reported that a Chinese Coast Guard vessel (CCGV) drove away a Filipino fishing boat while in the area on January 9, just days after President Ferdinand "Bongbong" Marcos Jr went on a state visit to China from January 3 to 5.

"The department awaits the official reports from the military and our law enforcement agencies on the CCG's actions to force Filipino fishermen in Ayungin Shoal to leave the area. The reports will serve as basis for diplomatic action on the incident," the DFA said.

The department added that the Philippines is "entitled to exercise sovereign rights and jurisdiction in the area, without any intervention from another country," citing domestic and international law, particularly the United Nations Convention on the Law of the Sea and the 2016 Hague ruling that China continues to ignore, reported philstar Global.

Over the weekend, the Philippine Coast Guard (PCG) said it is investigating the January 9 Ayungin shoal incident after Filipino fishing boat KEN-KEN boat captain Lito Al-os reported that CCGV 5204 drove them away while they were fishing in the vicinity waters.

The Chinese vessel manoeuvred at around 800 yards and deployed a rigid hull inflatable boat, with personnel aboard gesturing the Filipinos to leave. The Chinese vessel "continued to shadow" until Boxall Reef, reported philstar Global.

The PCG said it immediately deployed additional coast guard vessels to strengthen its presence in the West Philippine Sea. The Philippines' permanent presence on Ayungin shoal was established in 1996.

Marcos, in a roundtable with Philippine media, admitted that what is needed are actions from the Chinese government, noting that the PCG only stay within Philippine waters, reported philstar Global.

"Let me clarify what we talked about with President Xi. It was very simple. I said we have to raise this level of discourse between the Philippines and China," the president added.

"The video filmed by the fishermen is enough to prove that Chinese presence in the area and the intimidation of the Chinese Coast Guard of Filipinos in our own waters are still prevalent. This can be a strong basis for the Philippines to file a diplomatic protest against the Chinese government," PAMALAKAYA National Chairperson Fernando Hicap said in a statement over the weekend.

In 2013, the Philippines challenged China's legal basis for its vast claim in the South China Sea before the Permanent Court of Arbitration in The Hague, Netherlands. Manila won the case in a landmark award in 2016 after the tribunal invalidated Beijing's assertions.

China has ignored and belittled the ruling, maintaining an "indisputable" and "historical" claim over nearly the entire waters even as it encroaches on the territories of its smaller neighbours like the Philippines.

For years, the Philippines, China, Vietnam, Malaysia, Brunei, Taiwan, and China have been locked in territorial disputes in the South China Sea, a vital sea lane where oil and natural gas have been discovered.

China has since beefed up its reclamation activities in other disputed areas and transformed previously submerged features into artificial islands with multi-level buildings and runways. It has also installed surface-to-air missiles in these areas, triggering concerns from countries such as the US, Japan, and Australia. (ANI)