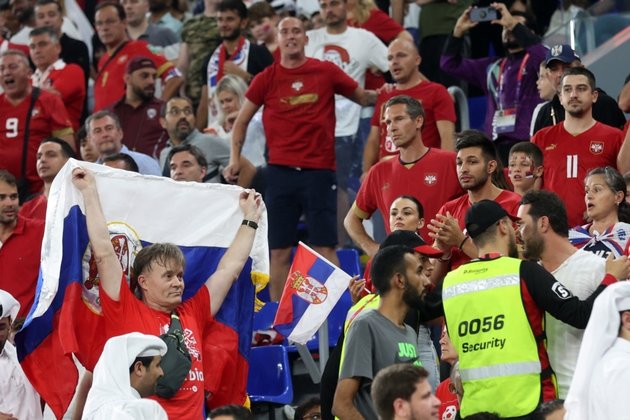 The investigation, which was announced on Monday, comes after complaints from the Football Association of Kosovo about offensive chants against two Swiss players who have ethnic Albanian roots and family ties to Kosovo. Serbia was eliminated from the tournament in the 3-2 defeat on December 2.

A statement from FIFA said its disciplinary committee has opened proceedings against the Football Association of Serbia 'due to potential breaches of articles 12 (misconduct of players and officials), 13 (discrimination) and 16 (order and security at matches) of the FIFA Disciplinary Code' related to incidents during the match.

It is the second time that FIFA has launched disciplinary proceedings against the Serbian team during the 2022 World Cup. The first occurred after a flag showing Kosovo as part of Serbia allegedly was displayed in the Serbian locker room after the match on November 26 with Brazil.

Serbian team manager Dragan Stojkovic, speaking at a news conference Monday after the national team returned from Qatar, said he had no comment on the latest actions by FIFA.

The Football Association of Kosovo had complained to FIFA about the alleged incidents, judging them to be nationalistic.

'It's good that FIFA dealt with this and that it took it seriously,' Agim Ademi, the president of the Football Association of Kosovo, told RFE/RL.

The Football Association of Serbia and the Serbian Sports Ministry did not respond to RFE/RL's request for comment about the disciplinary charges.

The Football Association of Kosovo had demanded a reaction from FIFA, due to 'severe insults by the coach of Serbia and racist actions of Serbian fans' during the match against Switzerland, which was captained by Granit Xhaka, and in which Xherdan Shaqiri scored the opening goal. Both players have roots in Kosovo.

Serbia does not recognize Kosovar sovereignty more than a decade after the mostly ethnic Albanian province declared independence. Kosovo has been a member of FIFA and UEFA, soccer's European governing body, since 2016.

FIFA's announcement said that 'racist calls against Albanians were heard during the entire match' and 'slogans with political messages" were also heard.

Several Serbian players also encroached onto the field when the referee didn't use a video review to study a claim for a penalty kick in the second half.

FIFA gave no timetable for the disciplinary case. Any punishments could apply when Serbia next plays competitive games in March in a European Championship qualifying group.

The association said in a statement that teams and fans "with behavior and a philosophy of hatred should not have a place at such important sports events as the World Cup in Qatar.'

Some information in this report came from The Associated Press.