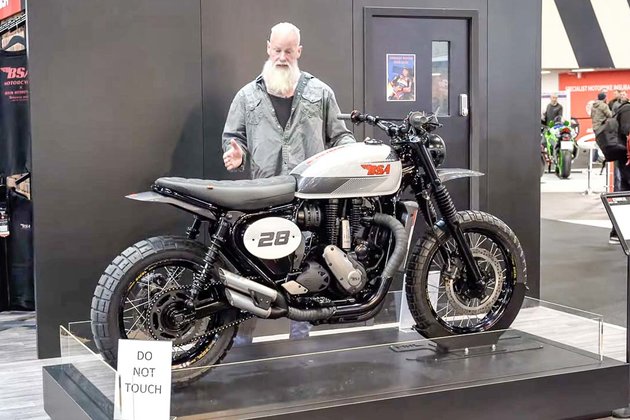 After reviving Jawa and Yezdi brands in India, Classic Legends recently announced the revival of BSA marque. With the launch of Goldstar 650, young and old motorcycle enthusiasts across Europe were excited. Birmingham Small Arms Company is one of the oldest motorcycle manufacturers in Britain.

The Gold Star 650 in particular was one of its best offerings. It was also one of the fastest motorcycles back in the 60s. Revived by Classic Legends, a subsidiary brand of automotive giant Mahindra, it is yet to be seen if BSA will ever make it to India to rival Royal Enfield's 650cc big boys.

Now that Royal Enfield's Scram 650 is spotted testing multiple times, what does BSA have in its arsenal to tackle it in Europe? Well, BSA Scrambler 650 is showcased at Motorcycle Live 2022 held at NEC Birmingham. Let's take a look at what BSA has to offer.

One look at this motorcycle is enough to appreciate what BSA was going for. It is simple. BSA Scrambler looks extremely minimalist and purposeful at the same time. It is based on the recently launched Gold Star 650. That said, there is a considerable amount of changes that we can spot on BSA Scrambler 650. Take a look at the walkaround video by Mr Darcy & The Ol' Man.

It gets a classic fuel tank along with round headlights. Side panels are minimal and the engine bay is finished off in black and the design pays tribute to BSAs of the past. Headlights get LEDs and a protective grille.

A small beak is present at the front along with fork gaiters to help keep slush in check. At the rear, the show bike doesn't get taillights, rear blinkers, or a tyre hugger. It gets twin barrel exhaust with sharply tapering tips, which reminds us of MV Agusta Brutale 800 RR. Rear suspension is taken care of by twin shock absorbers. The front gets regular telescopic forks.

Finishing off the Scrambler look, we have wire-spoke rims shod with block-pattern tyres. BSA Scrambler 650 gets a single-pod circular instrument cluster and a scrambler-style handlebar. This instrument cluster is fully digital and is mounted at the centre, unlike an off-set pod.

Braking hardware is likely to be similar to Gold Star 650's. Which gets disc brakes both at the front and rear. The front gets 320 mm disc and the rear gets 255 mm disc with Brembo brake calipers and ABS system. A large radiator is present at front which forms its cooling unit.

Engine is also from BSA Gold Star 650, which is a 652cc single-cylinder engine developed in collaboration with Austrian firm Rotax and Technical University of Graz in Austria. On BSA Scrambler 650, this engine is capable of making 45 bhp of max power and 55 Nm of max torque and is mated to a 5-speed gearbox. These figures are similar to Gold Star's.

Unlike Royal Enfiled Scram 650, BSA Scrambler 650 will be a single-cylinder thumper. Launch timeline is not yet revealed by BSA and there is no news about this launch in India. That said, BSA is likely to launch Scrambler 650 sometime next year.