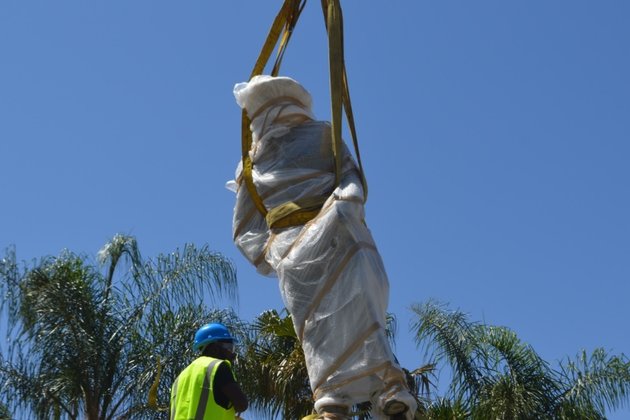 WINDHOEK - Namibian authorities have removed a controversial statue of a German colonial officer that was erected to mark the anniversary of the founding of the city of Windhoek, now the capital. Critics petitioned for the removal of the monument to a man who led German troops in a massacre of native people, and they dispute the idea that the city was founded by Germans.

Scores of Namibians celebrated as the statue of German colonial officer Curt von Francois was removed Wednesday from a pedestal in front of Windhoek's city buildings, where it stood for more than half a century.

The monument was erected in 1965 to honor the 75th anniversary of the city's founding, which was credited to von Francois. 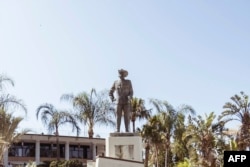 A general view of the statue of German colonial leader Curt von Francois before being removed in Windhoek, Nov. 23, 2022.

Von Francois was governor of the area, then known as German South West Africa, from 1891 to 1894.

But historians and activists dispute the idea that Germans, who colonized Namibia from 1884 to 1915, founded the city.

Former Windhoek mayor Job Amupanda told VOA it's well known that native people were living in the area decades before the Germans arrived.

"First of all, people think it is a process to decolonize our space," Amupanda said. But before we even go there, we are simply saying the statue is a representation of the lie, historically. And because it represents a lie, so there is no argument about keeping, protecting, and sustaining a lie."

Hildegarde Titus is with the A Curt Farewell movement that in 2020 petitioned for the statue's removal.

South Africa's white minority government, which controlled Namibia until it won independence in 1990, forcibly removed black residents from an area of the city called the "Old Location" in 1959.

"I think it is important to say that the statue being put up is a distortion of history cause like was mentioned he wasn't the founder of Windhoek. But also, when the statue was put up it was five years after the forced removals, of the Old Location, so it was very much a symbol of whitening the city."

Critics say the statue of von Francois, who ordered attacks to subdue natives that saw scores massacred, should have been removed long ago.

Von Francois married an ethnic Damara woman, who gave birth to their daughter and still has descendants in Namibia.

One of them, Sharon Nangombe, told VOA she agreed it was in the interest of the country for the statue to be removed, though she felt the descendants should have been involved in the decision.

Nangombe said the family never talked about von Francois's role in the atrocities and killings of native Herero and Nama people.

"What we got from the information is that.the good things that he did and what he did and what he made happen and now I've got another version of.. 'you can't put something up that killed people and then the victims, the family has to see him still standing there every single day.' But it's understandable. So, there's always two sides of a story."

Germany agreed last year to fund $1.3 billion in development projects in Namibia over 30 years in redress for the killings and land that was taken.

But some natives argue they were not sufficiently involved in the negotiations and in October Namibia asked Germany to renegotiate the terms of the deal, which Berlin has refused to do.

The statue of von Francois was moved to Namibia's Independence Museum, where it is expected to be put on display.