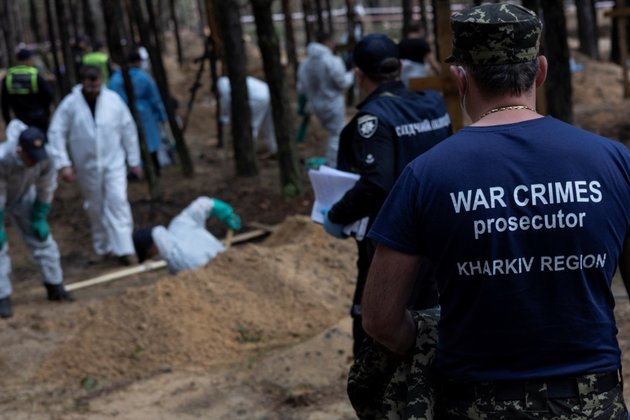 A senior U.S. diplomat this week accused the Russian forces invading Ukraine of 'systemic' war crimes, saying that abuses are taking place at a scale that suggests leaders in the highest levels of the Kremlin know about and support them.

Russia claimed the allegation was not supported with evidence and that reports of Ukrainian atrocities were being ignored.

'The aggression against Ukraine is a manifest violation of the U.N. Charter, and we have mounting evidence that this aggression has been accompanied by systemic war crimes committed in every region where Russia's forces have been deployed,' Van Schaack said. 'This includes deliberate, indiscriminate, and disproportionate attacks against the civilian population and elements of the civilian infrastructure. We're seeing custodial abuses of civilians and POWs and also efforts to cover up these crimes.'

'All the way up the chain of command'

She said the evidence suggests that 'these atrocities are not the acts of rogue units or individuals. Rather, they are part of a deeply disturbing pattern of reports of abuse across all areas where we're seeing Russia's forces engage.'

Pointing specifically to 'filtration' camps, through which an untold number of Ukrainian civilians, including many children, have been processed and deported to Russia, she said that the scale of the operation suggests the Kremlin's direct support.

'Prosecutors will follow the evidence where it leads, but when we're seeing such systemic acts, including the creation of a vast filtration network, it's very hard to imagine how these crimes could be committed without responsibility going all the way up the chain of command,' she said.

Monday's remarks from Van Schaack were not the first time a senior U.S. official has accused Russia of war crimes, but experts said that her comments seemed to mark a shift in the administration's attitude toward future prosecutions.

David J. Scheffer, a senior fellow at the Council on Foreign Relations and a former U.S. Ambassador-at-Large for War Crimes Issues, told VOA that Van Schaack's emphasis on the 'systemic' nature of the alleged war crimes was important.

FILE - A war crimes prosecutor, center, looks at a destroyed building with workers after the building was hit by a missile strike in the Ukrainian town of Sergiyvka, near Odesa, killing at least 18 people and injuring 30, on July 1, 2022.

'She is, rather formally, acknowledging that the commission of war crimes by the Russian military is not an isolated string of crimes, but rather, is part of an overall plan and executed on a large scale basis,' Scheffer said.

'That is not stated lightly, because once there is a determination that war crimes are being committed systemically, that involves sophisticated planning, organization and execution, which can only take place, normally, from the leadership level.'

New tone from US

The United States has not always been broadly supportive of efforts to establish standards for international criminal law, but in this case, the Biden administration has been actively supporting a variety of ongoing inquiries, including direct cooperation with the International Criminal Court.

'It's a really remarkable shift in the U.S. stance on international criminal law, from multiple previous administrations, to see this level of involvement,' Marti Flacks, director of the Human Rights Initiative at the Center for Strategic and International Studies, told VOA. 'It's a sign of, in part, just how serious and widespread and systematic the crimes in Ukraine are at this point.'

In past conflicts, including the Yugoslav wars in the 1990s, prosecution of war criminals has been a slow-moving process. However, Flacks said, the combination of surveillance technology and a seeming willingness by Russia to flagrantly violate international law may result in a more rapid pace of indictments.

'I would expect that we'll see some of those charges come out in a matter of months and not a matter of years,' she said. 'The question is how long it's going to take to actually get to a prosecution, which, of course, requires a defendant. And that's where we may be playing a very long game, in terms of maintaining that evidence and, and having those procedures ready to go when ... we're able to take someone into custody.'

Indictments may be sealed

In the event that cases made against Russian individuals are complicated by the accused person remaining in Russia, Van Schaack said prosecutors have the ability to issue indictments 'in absentia' in order to establish evidence and issue arrest warrants.

FILE - A baby stroller lies by a road after a deadly Russian missile attack in Vinnytsia, Ukraine, July 14, 2022.

Flacks, of CSIS, said that she would also expect some indictments to be issued under seal, so as not to alert individuals that there are active arrest warrants naming them.

'It's actually very practical,' she said. 'You don't want to announce that somebody's wanted and deter them from traveling to a place where they might actually be arrested.'

The comments from Van Schaack come at the same time that Russian sources have been making claims that they have evidence of a war crime committed by Ukrainian forces.

A snippet of video being widely shared on Russian social media shows a group of Russian soldiers emerging from a building, appearing to surrender to Ukrainian forces and being instructed to lie on the ground. With several Russian soldiers already on the ground, another person follows them out of the building and appears to fire a weapon toward Ukrainian troops. The video cuts away, but another scene, apparently shot later, appears to show the Russians who had been lying on the ground still in similar positions, but now dead in pools of blood.

Asked to address the video, Van Schaack said that U.S. officials are monitoring the situation closely, and stressed that the laws of war must be observed by both sides in the conflict.

However, she added, 'When we're looking at the sheer scale of criminality exhibited by Russian forces, it's enormous compared to the allegations that we have seen against Ukrainian forces. And likewise we're seeing a really vast difference when it comes to the reaction to such allegations. Russia inevitably responds with propaganda, denial, mis- and disinformation, whereas the Ukrainian authorities have generally acknowledged abuses and have denounced them and have pledged to investigate them.'

'We noted the statements of Ambassador-at-Large on International Criminal Justice Beth [Van Schaack] on the murder of captured Russian military personnel by Ukrainian neo-Nazis,' the statement said. 'The official refused to directly condemn the massacre of our unarmed soldiers, despite the confirmation of the authenticity of the relevant video materials by American journalists, who did not hush up the tragedy.'

It continued, 'The diplomat cynically referred to the fact that the 'war crimes' of the Russian Army are recorded 'many times more often' than those by the Armed Forces of Ukraine. At the same time the State Department yet again failed to provide any evidence of violent acts allegedly committed by our servicemen.'