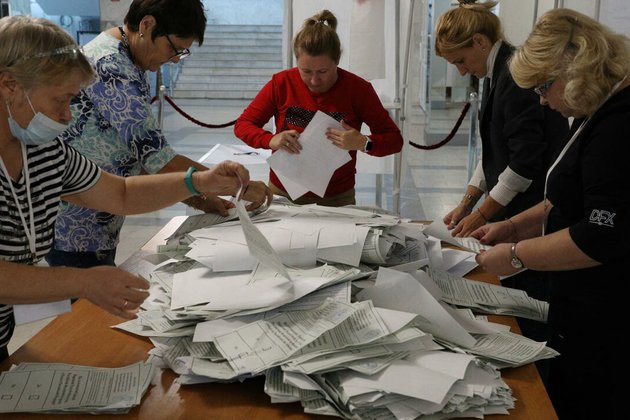 President Volodymyr Zelensky condemned the Russian-staged referendums in four occupied regions of Ukraine that reported huge majorities in favour of joining Russia as a "farce". The referendum results come amid increasing tensions between Russia and the West over suspected sabotage of two Baltic Sea gas pipelines between Russia and Europe. Follow our liveblog for the latest developments. All times are Paris time (GMT+2).

6:19am: Canada to impose new sanctions on Russia over 'sham' referendums in Ukraine

Canada Prime Minister Justin Trudeau said he intends to impose new sanctions over Russia's "sham" referendums in occupied regions of Ukraine. "Canada does not and will not ever recognise the results of these sham referendums or Russia's attempted illegal annexation of Ukrainian territories," Trudeau said in a statement.

Sabotage is the most likely cause of leaks in two Baltic Sea gas pipelines between Russia and Europe, European leaders said Tuesday, after seismologists reported explosions around the Nord Stream pipelines.

European leaders and experts cited the possibility of deliberate interference with the pipelines amid an energy stand-off with Russia provoked by the war in Ukraine. Neither Nord Stream pipeline is currently supplying energy to Europe.

Denmark said earlier it believed "deliberate actions" by unknown perpetrators were behind big leaks in the two natural gas pipelines running under the Baltic Sea from Russia to Germany.

11:24pm: Ukraine will 'defend its people' in regions of annexation vote, Zelensky says

Ukraine will "defend" citizens in regions which Russian authorities said voted overwhelmingly for a merger with Russia, President Volodymyr Zelensky said on Tuesday.

"We will act to protect our people: both in the Kherson region, in the Zaporizhia region, in the Donbas, in the currently occupied areas of the Kharkiv region and in the Crimea," he said in a video posted on Telegram. "This farce in the occupied territory cannot even be called an imitation of referendums."

The United States will introduce a resolution at the United Nations Security Council condemning referendums held by Russia in occupied regions of Ukraine, the US Ambassador to the UN said on Tuesday.

The resolution, to be introduced jointly with Albania, will call on member states not to recognise any altered status of Ukraine and also obligate Russia to withdraw its troops, envoy Linda Thomas-Greenfield said at a council meeting.

Ukrainian President Volodymyr Zelensky told the Security Council that the results were pre-determined as he called for Russia to be excluded from all international organisations and for new sanctions against Moscow.

"Russia's recognition of these sham referendums as normal, the implementation of the so-called Crimean scenario and another attempt to annex Ukrainian territory will mean that there is nothing to talk about with the president of Russia," Zelensky said in virtual remarks. The United States was also preparing a new round of sanctions against Russia should it annex Ukrainian territory and a $1.1 billion arms package for Ukraine that will be announced soon, US officials said.

China's Ambassador to the United Nations Zhang Jun told the meeting that isolation and sanctions would only "lead to a dead end".

10:14pm: 'So many' Ukrainians no longer have pro-Russian views

"Seen from Kyiv, I think that people here just think they're just making up the result - giving it, what, 98 percent in favour of annexation, at least in some of those regions," FRANCE 24's Gulliver Cragg reported from the Ukrainian capital.

"Of course, there are some people in those areas of Ukraine who do support Russia, particularly in those parts of the Donbas that have been under de facto Russian occupation since 2014, and therefore have had access pretty much only to Russian media," Cragg continued. "But the anecdotal evidence that we get from southern Ukraine in particular, and the parts of the Donbas that have been occupied in recent months [...] is that there is very strong resistance to Russian occupation."

"I've spoken to so many people who say they used to have pro-Russian attitudes; they used to vote for pro-Russian political parties in Ukraine and they've changed their minds after seeing the brutality of the Russian army and this totally unjustified invasion of Ukraine."

10:07pm: 'Further escalation' on the cards from Russia

"Moscow's rhetoric will escalate as the annexation is being formalised, and of course this serves the purpose for Russians to formally annex and absorb these territories," said Natia Seskuria, an associate fellow at the Royal United Services Institute in London.

"We have seen how - under what circumstances - these sham referendums have been held. And, in conjunction with this, we have heard some escalatory rhetoric from Dmitry Medvedev for example, the former president of Russia, reiterating basically Putin's claims about the nuclear threat. So as the results are being announced, I think the rhetoric will become tougher and will point at further escalation of this war."

Russian-installed officials in occupied regions of Ukraine reported huge majorities on Tuesday in favour of becoming part of Russia after five days of voting in so-called referendums that Kyiv and the West denounced as a sham.

Hastily arranged votes had taken place in four areas - the eastern regions of Donetsk and Luhansk, and to the south Zaporizhzhia and Kherson - that make up about 15% of Ukrainian territory.

Luhansk authorities said 98.5% of people there had voted to join Russia, based on 69% of ballots counted. In Zaporizhzhia, a Russian-appointed official put the figure at 93.1 % with the count now completed. while in Kherson the "yes" vote was running at more than 87%, according to the head of the voting committee.

Russia's Tass news agency said 93.95% in Donetsk region had voted in favour, with nearly 32% of the ballots counted.

Within the occupied territories, Russian-installed officials took ballot boxes from house to house in what Ukraine and the West said was an illegitimate, coercive exercise to create a legal pretext for Russia to annex the four regions.

Russian President Vladimir Putin could then portray any Ukrainian attempt to recapture them as an attack on Russia itself. He said last week he was willing to use nuclear weapons to defend the "territorial integrity" of Russia.

The CIA had weeks ago warned Germany about possible attacks on gas pipelines in the Baltic Sea, German magazine Spiegel said on Tuesday, after gas leaks in Russia pipelines to Germany were reported.