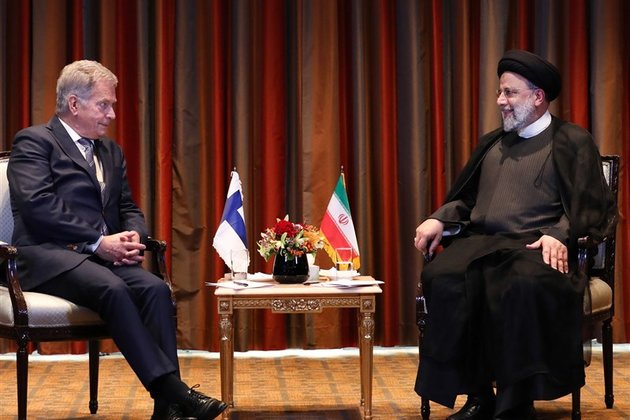 TEHRAN (Tasnim) - Iranian President Ebrahim Raisi slammed the Western governments' double standards on the human rights as the most serious example of violation of human rights per se.

In a meeting with his Finnish counterpart Sauli Niinisto on the sidelines of the UN General Assembly in New York, President Raisi criticized the double standard of the West in dealing with human rights.

"Double standards are the biggest and most serious example of human rights violations. According to the official statistics of Western countries and especially the United States, every year a large number of citizens of these countries are killed by unjustified use of force by the police, but this issue has not in any way caused the countries that claim to defend human rights to express concern," he added.

Hailing the friendly and developing ties between Tehran and Helsinki, Raisi said, "Considering the various capacities available in Iran and Finland, the interactions between the two countries can be upgraded to a higher level."

"The Islamic Republic is determined to develop cooperation and improve the level of relations with all friendly countries, including Finland," he stated.

Explaining the logic of Iran in the nuclear issue, President Raisi said, "Considering the history of the violation of the agreement by the United States and the European countries that are parties to the nuclear agreement, today no one in the world can claim that Iran's position in obtaining reliable guarantees for not violating the agreement again by Western countries is irrational."

Describing the US sanctions against Iran as cruel and illegal, Raisi noted, "The sanctions are the continuation of the same policy of military attack with the intention of imposing the wishes and opinions of hegemonic and tyrannical countries on independent countries, which is being followed in a new form, but sanctions have not been able to stop the Islamic Republic and I invite you to visit Iran to witness the continuation of our country's growth and progress in various scientific, technical, production and economic fields."

President Raisi also referred to the concern expressed by the president of Finland regarding the situation of the Afghan people and refugees and said, "Is it possible to solve a problem for them by simply expressing concern for the people of Afghanistan and not paying attention to why this situation has arisen?"

The president stated that the current situation of the Afghan people is the result of the 20 years of US and NATO presence in this country, which has only resulted in destruction, killing and bloodshed, and that the disability of 35,000 Afghan children during this period was only one of the results of this presence, saying, "Violation of human rights cannot be cured by issuing resolutions and requires diligent follow-up and elimination of its roots and factors."

For his part, the Finnish president thanked for holding this meeting and said, "Finland and Iran have good relations with each other and their bilateral relations are friendly and developing."

Thanking the Islamic Republic of Iran for hosting a huge population of Afghan refugees, he asked Raisi to mediate to end the conflicts in Ukraine.

HALIFAX, Canada: Cyclone Fiona struck northeast Canada this weekend, with reports of houses being washed into the ocean, roofs torn ...

BRUSSELS, Belgium: In response to a new escalation in Russia's war against Ukraine, the European Union is considering an oil ...

Longstanding divisive issues between Azerbaijan and Armenia resulting from or related to the Nagorno-Karabakh conflict remain unresolved, despite continuing efforts ...

WASHINGTON D.C.: The U.S. government said it will seek the death penalty for Sayfullo Saipov, the man charged with running ...

PARIS, France: Throughout northern and western Europe, vegetable producers are considering not planting crops due to the financial effects of ...

SAN FRANCISCO, California: Amidst declining margins and weak sales of outdated clothes of its brands, including Old Navy and Banana ...

Many forced out as US rental apartments jump 10% in price

WASHINGTON D.C.: Young workers in the U.S. have been the group most harmed by surging rental prices, with many taking ...

US to allow more tourist flights to Cuba

WASHINGTON D.C.: The U.S. Transport Department has announced that the Biden administration has approved the expansion of U.S. flights to ...

MOSCOW, Russia: After battling supply chain issues, potato shortages and a heftyrebranding job, the successor to McDonald's in Russia, Vkusno ...

Star Wars: The Rise of Skywalker