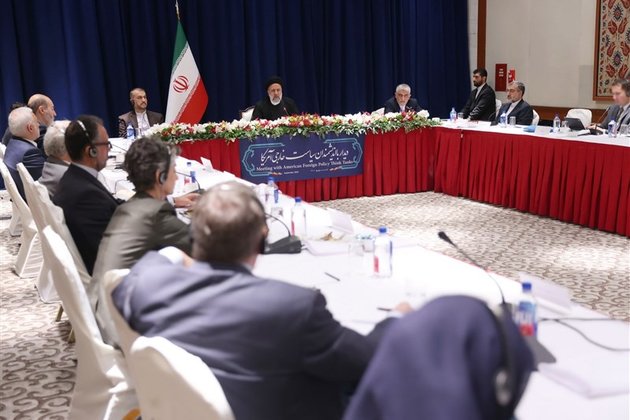 TEHRAN (Tasnim) - The cases that the International Atomic Energy Agency is considering against Iran, including the issues relating to the Safeguards Agreement, must be dropped so that they won't be used as a leverage for pressures on Tehran, President Ebrahim Raisi said.

During his stay in New York, the Iranian president had a meeting with a group of American foreign policy experts on the sidelines of the UN General Assembly.

In response to a question about whether Iran is willing to agree on nuclear negotiations, President Raisi said, "The Islamic Republic of Iran has not withdrawn from the existing agreement and has fulfilled all its obligations in this agreement. It was the United States that withdrew from this agreement, and it was the European countries that did not fulfill their obligations."

Pointing out that no one has described Iran's demands as unreasonable, the president said, "The next point is, how long are the safeguard issues going to be abused as a pressure lever against Iran? How many cases have been opened in this field and each time it was announced that the claims made in it were not true?"

President Raisi stated, "The International Atomic Energy Agency has so far emphasized 15 times that the nuclear activities of the Islamic Republic of Iran are peaceful and do not deviate from the Agency's regulations. Are these reports invalid for Western countries?"

In response to a statement that the IAEA is an independent and non-political institution, Raisi said, "In the same region where Iran is located, how many other countries have nuclear activities and even activities related to the production of nuclear weapons? How much of their activities are under the supervision of the IAEA, and even though they are making nuclear weapons, neither the IAEA nor some countries in the world are sensitive to them."

Asked about the process of improving relations between Iran and Saudi Arabia, the president added, "Iran seeks to strengthen and develop relations with its neighbors and we have repeatedly emphasized that if outsiders do not interfere in regional issues, the countries of the region themselves have sufficient capacity to resolve the issues between each other."

Asked about the solution to Afghanistan's problems from Iran's point of view, he stated, "One of the main reasons for the emphasis of the Islamic Republic of Iran on the non-interference of outsiders in regional issues is the current situation of the Afghan nation after more than 20 years of occupation and intervention by the United States and NATO forces in this country. The disability of 35,000 children is just one of the results of two decade of occupation of Afghanistan."

The president added, "From the point of view of the Islamic Republic of Iran, the solution to Afghanistan's problems is to form an inclusive government through dialogue and understanding of all groups and clans of this country."

In response to a question about the conflicts in Ukraine, Raisi said, "Iran itself has gone through the bitter experience of an eight-year war that was imposed on this country with the support and instigation of the United States and European countries, and therefore, it uses all its capacities to mediate and end it as soon as possible."

In response to the question of what Iran has done to fight the drug trade, Raisi stated, "The largest volume of drug production is in Afghanistan, which was under the occupation and control of the United States and NATO forces. If Iran does not stop the drug trafficking, all of Europe and America will become a breeding ground for drug traffickers."

Asked about the death of a young girl in Iran, the president said, "You are a researcher and you are expected to do research before accepting and re-proposing an issue, make sure that it is correct and that what you say is based on valid and approved documents."

The president added, "I personally contacted her family and promised that I would pursue the matter carefully so that all aspects of the matter are investigated and no one's rights are violated."

Also, in response to another question on whether Iran is getting closer to the East, the president said, "We want balance in our foreign policy and interactions, and we do not see the relationship with the world only in the interaction with a few Western countries."

HALIFAX, Canada: Cyclone Fiona struck northeast Canada this weekend, with reports of houses being washed into the ocean, roofs torn ...

BRUSSELS, Belgium: In response to a new escalation in Russia's war against Ukraine, the European Union is considering an oil ...

Longstanding divisive issues between Azerbaijan and Armenia resulting from or related to the Nagorno-Karabakh conflict remain unresolved, despite continuing efforts ...

WASHINGTON D.C.: The U.S. government said it will seek the death penalty for Sayfullo Saipov, the man charged with running ...

PARIS, France: Throughout northern and western Europe, vegetable producers are considering not planting crops due to the financial effects of ...

SAN FRANCISCO, California: Amidst declining margins and weak sales of outdated clothes of its brands, including Old Navy and Banana ...

Many forced out as US rental apartments jump 10% in price

WASHINGTON D.C.: Young workers in the U.S. have been the group most harmed by surging rental prices, with many taking ...

US to allow more tourist flights to Cuba

WASHINGTON D.C.: The U.S. Transport Department has announced that the Biden administration has approved the expansion of U.S. flights to ...

MOSCOW, Russia: After battling supply chain issues, potato shortages and a heftyrebranding job, the successor to McDonald's in Russia, Vkusno ...

Star Wars: The Rise of Skywalker