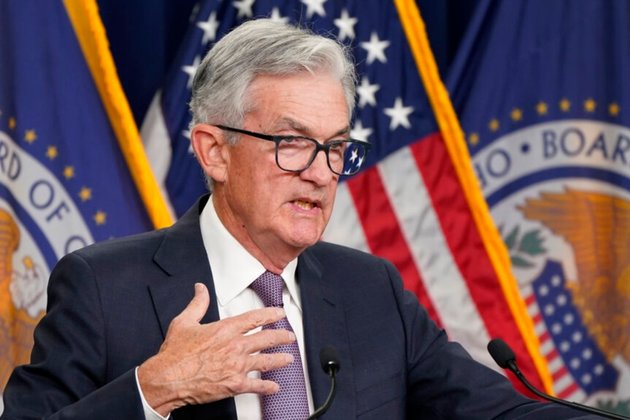 As the United States heads into November's midterm elections, the Federal Reserve on Wednesday announced another sharp increase in interest rates as it continues its struggle against stubbornly high inflation. The increase of three-quarters of a percentage point raised the benchmark federal funds rate target to between 3% and 3.25%, the highest it has been in nearly 15 years.

In announcing the change, the Fed said that further increases in the target rate would be 'appropriate.' On average, the members of the central bank's Open Market Committee projected that the midpoint of the target range by year end would be about 4.25%.

The Fed's battle against inflation has been less effective than policymakers had hoped. Annualized inflation in August was 8.3%, only slightly lower than it had been in July, and more than four times the Fed's target rate of 2%.

Fed Chair Jerome Powell said in a press conference Wednesday that the Fed was committed to reducing inflation, even though doing so would require an extended period of slow economic growth and would likely increase the unemployment rate.

He characterized the Fed's choice as being between two evils.

'Higher interest rates, slower growth and a softening labor market are all painful for the public that we serve, but they're not as painful as failing to restore price stability,' Powell said.

The fight against inflation is taking place amid political uncertainty in the U.S. As for the midterms, some experts say Republicans stand a strong chance of taking over one of the two chambers of Congress, which would break Democrats' unified control of the legislative and executive branches of government and allow Republicans to block much of President Joe Biden's agenda.

The choice between rising prices and rising interest rates combined with higher unemployment may not be particularly appealing to voters, and neither alternative will likely benefit the incumbent president or his Democratic Party.

Pointing out how Americans are suffering from persistently high inflation has been a major part of Republicans' campaign strategy this year, and with good reason. In early September, according to a poll taken by the Gallup organization, 56% of Americans reported that their families were experiencing at least 'moderate hardship' because of rising prices, with 12% characterizing the hardship as 'severe.'

In remarks on the Senate floor this week, Senate Minority Leader Mitch McConnell hammered home the GOP message, saying, 'Month after month after month, Democrats' policy failures are continuing to add inflation on top of inflation. The inflation rate plateauing above 8% does not mean that families are catching a break. It means exactly the opposite. It means that families are continuing to see prices go up, and up, and up all the time.'

FILE - The handle from a gasoline pump hangs from the filler neck of a motorist's vehicle at a Shell station, July 31, 2021, in Englewood, Colo. Gas prices have fallen in recent months, easing the strain on Americans' budgets.

Biden, meanwhile, has been touting price decreases when they occur and deflecting blame for the increases when possible. After Russia's invasion of Ukraine in February drove up gasoline prices - the most visible signal of inflation for many Americans - Biden publicly blamed Russian President Vladimir Putin for consumers' pain.

This week, with gas prices falling, the president declared on Twitter, 'Folks, gas prices are now back to levels they were at in early March. That means nearly all of the increases since the beginning of Russia's war in Ukraine have been wiped out.'

While some prices have fallen, however, others remain stubbornly high. Groceries, housing and electricity, in particular, are much more expensive now than they were a year ago.

Mark Hamrick, Washington bureau chief for Bankrate.com, told VOA that gauging the political impact of the Fed's decisions is tricky.

'I'm not sure that voters are going to be spending a lot of time parsing the nuances of monetary policy with respect to their voting decisions, but clearly, the state of the economy is something that affects everyone,' he said. 'The impacts of a variety of influences, including high and sustained inflation, the failure of wages to keep up with the rate of inflation, are things that voters and everyone else are very much mindful of.'

He added, 'I think that you have to say that to some degree, the current environment does not necessarily help incumbents, per se. But you have to handicap that in the context of, 'What is the prism through which a voter is looking at the current situation?' And that's where it becomes much more murky.'

FILE - Beef is shown in the meat department at Lambert's Rainbow Market in Westwood, Mass. Mark Hamrick of Bankrate.com, says, 'The state of the economy is something that affects everyone,' but it's hard to gauge the impact of Federal Reserve Board decisions.

The Federal Reserve is raising rates to reduce demand in the economy. High demand tends to drive inflation as buyers bid up the price of increasingly scarce goods. As interest rates go higher, though, money becomes more 'expensive.' That means a dollar in a savings account earns a higher return than it did before the rate increase and makes account holders somewhat less likely to spend it.

Higher rates are likely to slow economic growth and to increase unemployment. The current rate of unemployment is now low by historical standards, at 3.7%. Members of the Federal Open Market Committee, in Wednesday's report, indicated that they expect that rate to be as high as 4.5% by the end of next year, which translates into well over 1 million people losing their jobs.

While inflation is a major political issue among Americans, who tend to blame it on the current president's administration, analysts note that the inflation the U.S. is experiencing is part of a global phenomenon.

Annualized inflation in other parts of the world has been on the rise as well. In the European Union in August, it was above 9%, though the differences across countries could be dramatic. Poland, for example, has experienced 16.2% inflation in the year ending in August, while in France, the rate has been a more modest 5.9%.

Prices are also rising in other parts of the world, though at different rates. In the Americas, Canada has seen rates rise 7%, compared with 8.7% in both Mexico and Brazil. In Asia, India has experienced a 7% increase, while China and Japan have seen only 2.5% and 3% increases, respectively.