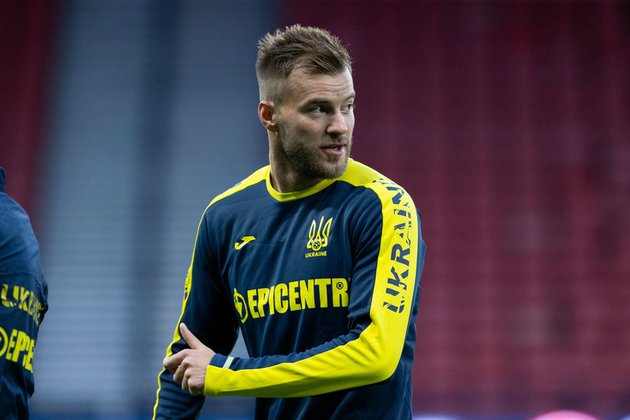 Ukrainian national football team captain Andrey Yarmolenko has demanded that Russia be completely isolated the international sporting community, after the Russian men's national team was banned from qualifying for the 2024 European Championship.

Speaking ahead of a UEFA Nations League match against Scotland on Wednesday, Yarmolenko claimed that "Russian football, all Russian sports, the whole country, should be isolated from the rest of the world."

"All the players of the [Ukrainian] national team want Russia to be punished as much as possible," Yarmolenko added.

"We are in favor of isolating them from the whole world. I will be glad if they are excluded from all competitions, not only football ones."

Owing to a decision made by UEFA and FIFA on February 28 when the sporting bodies acted on an International Olympic Committee (IOC) recommendation, all Russian football teams are currently banned from international competitions.

This initially meant the men's national team was thrown out of the qualification playoffs for the FIFA 2022 World Cup in Qatar, while the women's team was removed from the group phase of Euro 2022 in England.

UEFA announced fresh rulings in early May banning the Russian men's team from the Nations League, which Yarmolenko's Ukraine team will feature in this week.

Russian club teams were also blocked from participating in continental tournaments such as the prestigious UEFA Champions League and UEFA Europa League.

On Tuesday, UEFA confirmed that the Russian men's team was excluded from Euro 2024 qualification in a development which came amid pressure from Ukraine and reportedly from the interior minister of tournament hosts Germany.

Yarmolenko, 32, has been critical of Russia since the military operation in his country began earlier this year.

In March, the former West Ham winger who is now at Al Ain in the UAE called out ex-Russia captain Artem Dzyuba and claimed that Russian players were "s**theads" for not speaking out.

Dzyuba responded by saying he was "proud to be Russian," warning that it will later "be impossible to rewind" such outbursts from the likes of Yarmolenko.

Yarmolenko has also clashed with one of his compatriots and revealed that he and former Ukrainian national team icon Anatoly Tymoshchuk had told each other to "f**ck off" after they locked horns over the conflict with Russia.

Tymoshchuk is Ukraine's all-time record international appearance-maker but has been disowned by many in his homeland for continuing in his role at Russian Premier League champions Zenit St. Petersburg as an assistant coach.

Ukraine's match against Scotland in Glasgow on Wednesday is their first of three fixtures in under a week.

They also take on Armenia in Group E on Saturday, before facing Scotland again three days later in Krakow, Poland.