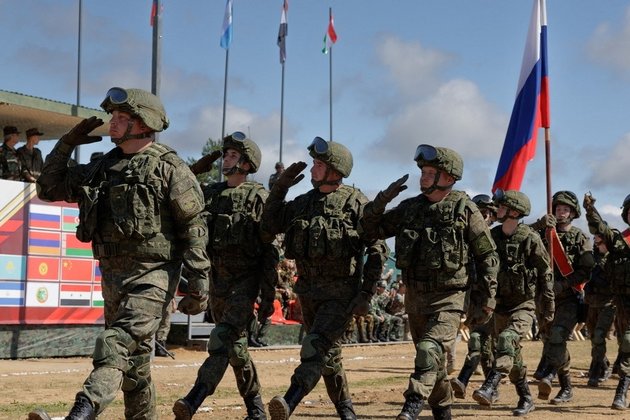 Russian President Vladimir Putin announced Wednesday the partial mobilization of his country's military reserves in a move that follows Ukrainian gains in a counteroffensive in northeastern Ukraine.

Putin said in a televised address the mobilization is necessary to protect Russia's homeland and sovereignty.

Russian Defense Minister Sergei Shoigu said the military would be calling up 300,000 reservists.

Putin said the West is trying to weaken and destroy Russia, and that his country will "use all the means at our disposal to protect Russia and our people."

He also reiterated Russia's goal in its now seven-month-old invasion of Ukraine is to "liberate" Ukraine's eastern Donbas region, saying the people there do not want to be part of Ukraine.

Russian President Vladimir Putin makes an address in the course of Russia-Ukraine military conflict in Moscow, Russia, in this still image taken from video released Sept. 21, 2022.

The separatist leaders of the Moscow-controlled Luhansk and Donetsk regions in the Donbas said Tuesday they are planning to hold votes starting late this week for the territories to declare themselves as part of Russia.

"The situation on the front line clearly indicates that the initiative belongs to Ukraine," Zelenskyy said in his nightly address. "Our positions do not change because of the noise or any announcements somewhere. And we enjoy the full support of our partners in this."

Referendum voting in the region, populated by many Russian-speaking people, would most likely go in Moscow's favor.

But any declaration that the territory is part of Russia would not be recognized by either Ukraine or by the United States and its Western allies who have supplied the Kyiv government with billions of dollars in armaments to fend off Moscow's seven-month invasion.

The White House immediately rejected Russia's plans for the referendums, saying they may be an effort by Moscow to recruit troops in the region in the wake of its recent defeats on the battlefront.

Jake Sullivan, President Joe Biden's national security adviser, said the referendums violate the principles of sovereignty and territorial integrity since the lands in question are part of Ukraine. He said Biden in a Wednesday speech at the United Nations General Assembly would issue a 'firm rebuke' to Russia for its war against Ukraine.

NATO chief Jens Stoltenberg said, "Sham referendums have no legitimacy and do not change the nature of Russia's war of aggression against Ukraine. This is a further escalation in Putin's war. The international community must condemn this blatant violation of international law and step up support for Ukraine."

If Russia were to claim the Luhansk and Donetsk provinces as its own, it could set the stage for an escalation in the fighting if Ukrainian forces try to take them back.

Denis Pushilin, head of the Donetsk region, said that the "long-suffering people of the Donbas have earned the right to be part of the great country that they always considered their motherland."

He said the vote will help "restore historic justice that millions of the Russian people were waiting for."

Since early September, Kyiv's forces have swiftly recaptured large swaths of land in the Kharkiv region of northeast Ukraine that Russian troops took over in early weeks of the war. Moscow-backed leaders in the Russian-occupied Kherson region of southern Ukraine and pro-Russia activists in the partly occupied Zaporizhzhia region have also called for referendums on becoming part of Russia.

Some information for this story came from The Associated Press, Agence France-Presse and Reuters.