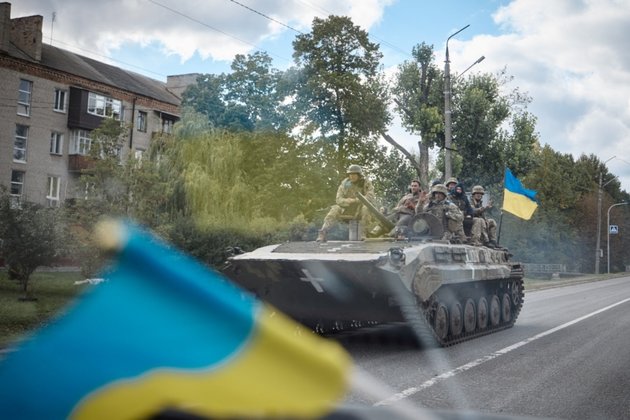 Ukrainian President Volodymyr Zelenskyy said his country is "stabilizing" the situation in its northeastern Kharkiv region after driving out Russian forces in a counteroffensive, and he called on the international community to speed up aid to Ukraine.

Zelenskyy said in his nightly address Monday that at this stage, the pace at which things happen is very important.

British Prime Minister Liz Truss said in a statement Tuesday that next year Britain will match or exceed the $2.6 billion in aid it committed to Ukraine in 2022.

"Ukraine's victories in recent weeks have been inspirational. Time and time again these brave people have defied the doubters and showed what they can do when given the military, economic and political support they need," Truss said.

Zelenskyy Says No Letup in Push to Reclaim Territory

With world leaders gathering for the U.N. General Assembly meetings in New York, the prime minister's office said she would use her meetings there to solidify Britain's commitment to Ukraine's territorial integrity and sovereignty and to "catalyze global efforts to stop Russia from profiting off its energy exports while ending energy dependence on authoritarian regimes."

Zelenskyy is scheduled to address the U.N. gathering with a pre-recorded message on Wednesday.

A senior U.S. defense official said Monday the Wagner Group, a paramilitary company run by Russian oligarch Yevgeny Prigozhin, is trying to recruit 1,500 convicted felons to take part in Russia's war in Ukraine. The defense official added, however, that many are refusing to join.

'Our information indicates that Wagner has been suffering high losses in Ukraine, especially and unsurprisingly among young and inexperienced fighters,' the U.S. official, speaking on the condition of anonymity, told reporters at a briefing.

The European Union has imposed sanctions on the Wagner Group, accusing it of clandestine operations on the Kremlin's behalf, Reuters reported.

President Vladimir Putin has said the group does not represent the Russian state.

VOA Pentagon correspondent Carla Babb contributed to this report. Some information for this story came from The Associated Press, Agence France-Presse and Reuters.