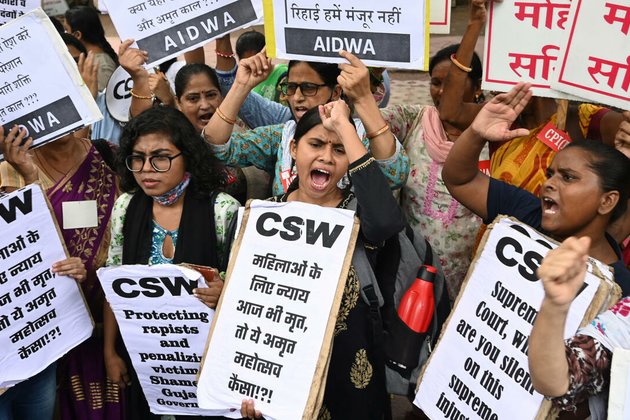 India's Gujarat has set free 11 men convicted of the gang rape of a Muslim woman and the murder of her relatives during the state's 2002 riots.

The rapists sentenced to life in prison in 2008 were greeted with sweets and garlands as they stepped out of a Gujarat jail to a hero's welcome on Monday.

Their release coincided with Prime Minister Narendra Modi leading celebrations on the 75th anniversary of India's freedom with calls to respect women.

On 3 March, 2002, Bilkis Bano was 21 and five months pregnant when a Hindu mob set upon her family, killed 14 of her relatives and smashed her daughter to the ground till the three-year-old died.

Bano, now a face of the carnage of 1,000 mostly Muslims, regained consciousness the next day and begged for clothes to cover her nudity as she sought refuge.

The 11 men were part of the mob on a rampage in Gujarat 20 years ago when Prime Minister Modi was chief minister of the state.

'I am still numb'

Bano in a statement on Tuesday said the action of Gujarat, which is also governed by India's ruling BJP party, has "shaken" her faith in justice.

"How can justice for any woman end like this? I trusted the highest courts in our land. My sorrow and my wavering faith are not for me alone but for every woman who is struggling for justice in courts," she said.

"I am still numb," her heart-wrenching note said as she urged the Gujarat government to rescind its decision.

Yakub Rasul, her husband, said the family was "extremely worried" because the killers were on the loose.

Gujarat asserted its decision to free the 11 men was in line with a 1992 local policy on remitting prison sentences on grounds of age and good behaviour.

But in 2014 Gujarat issued a new policy akin to one published by Modi's federal BJP government which stipulated people convicted of serious crimes cannot seek remission of their jail time.

"But the 1992 policy, which is applied here, did not have such an exception," top Gujarat bureaucrat Raj Kumar said in defence of the release of the killer-rapists amid outrage.

Priyanka Chaturvedi of the Shiv Sena Party, which for long was a political ally of the Hindu nationalist BJP, attacked the Gujarat government.

"The kind of indiscretion used by the state government of Gujarat to give them these special remissions smacks of the duplicity of how the law works for some and denies justice to some," she said.

Supreme Court counsel Vrinda Grover lamented the victim received justice after "fighting a very difficult legal battle in Gujarat" where scores of rioters have been let off by courts.

"Not only it is Bilkis who secured justice but it vindicated the hopes of many that perhaps these struggles could lead to some kind of regress," Grover told NDTV.

"After that there was a reasonable expectation that these people will suffer the incarceration because surely this is amongst the gravest of crimes," she added.

India's main opposition Congress party trained its guns on Modi for the action of his home state Gujarat.

"What message is being given to the women of the country by those who peddle lies about Nari Shakti (women power)," party leader Rahul Gandhi tweeted in Hindi.

Women faced horrific atrocities in the riots, which erupted after 59 Hindu pilgrims died in a fire on a train in Gujarat which was blamed on Muslims.