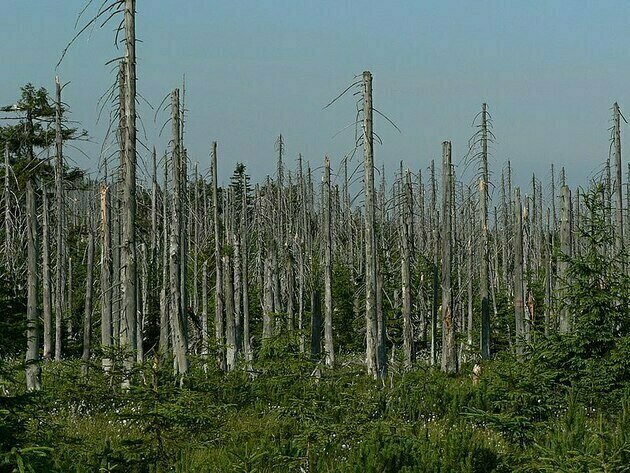 Air pollution has no respect for borders. Regional agreements can only go so far. The world needs a global agreement.

In the 1960s, scientists across Europe began to notice that the rain was unusually acidic, denuding forests and poisoning lakes. They traced the problem to the sulphur-dioxide emissions from coal-fired power plants. And not just their own - for example, sulphur emissions from the UK were causing the forests in Scandinavia to suffer.

By 1979, the United Nations Economic Commission for Europe (UNECE) had established a landmark Convention on Long-range Transboundary Air Pollution to reduce the toxic emissions. It's been a slow-moving agreement - it took four years just to be ratified - but over the last 40 years sulphur-dioxide emissions have dramatically fallen. And the agreement's journey is far from over. With a new taskforce on air pollution set to meet for the first time in October, the lessons from Europe can show the way to a global convention on air pollution.

All pollution can be transboundary. Whether it's plastic particles in the ocean or nitrogen run-off from farming, pollution has no respect for sovereign borders. Even Australia, with its continental mass and vast surrounding oceans, contributed to global air pollution as a result of the 2019-20 'Black Summer' bushfire emergency.

The global focus of air pollution has shifted from Europe in the late 20th century to Asia. Even as Europe cleaned up its industry, it shifted the production of goods to cheaper labour markets. Asia is now the hotspot for air-pollution emissions.

When ranked according to the pollution from fine soot particles, six of the top 10 cities are in Asia. Nearly 60 percent of all deaths globally attributable to fine particle pollution occurred in India and China. Air pollution typically consists of oxides of nitrogen and sulphur, plus fine particulate matter, ozone, ammonia, heavy metals, volatile organic compounds, and persistent organic pollutants. Fine particulate matter has been the most studied air pollutant and is linked to a number of health problems, including preterm births, loss of cognitive function, lung cancer, stroke and heart disease, asthma and diabetes.

A pressing problem in Southeast Asia is the smoke haze from agriculture. Land for farming is often cleared using slash-and-burn practices, and crop residues are burned to clear the way for next year's crop. This is a particular problem in Indonesian Kalimantan and Sumatra, where large tracts of land are cleared for palm-oil and timber plantations. Indonesia experienced major forest fires in 1997, 2015 and 2019, with the smoke blanketing neighbouring countries for weeks.

As a response to the Indonesian forest fires, the Association of Southeast Asian Nations (ASEAN) drafted a multilateral agreement on transboundary smoke haze in 2002. It entered into force in 2003 and Indonesia was the last to ratify it, in 2015. The agreement built upon earlier, smaller agreements on smoke haze.

But such haze is just one example of air pollution. Even with the agreement in place, transboundary air pollution will continue to be a problem in Southeast Asia, and in Asia more generally, until the world agrees to collectively address the problem. Air pollution from China, India, the Middle East and Africa can, and will, affect people living in Asia.

The UNECE Convention on Long-range Transboundary Air Pollution, drafted to tackle sulphur dioxide, has since expanded to also tackle oxides of nitrogen, ammonia, volatile organic compounds, fine particles, persistent organic pollutants and heavy metals. Air quality in Europe, while still imperfect, continues to improve. ASEAN and the wider world could look to the UNECE convention as a template for forging its own framework. Or work could be undertaken to replicate or expand the agreement, which is currently limited to members or observers of the UNECE.

The United Nations Framework Convention on Climate Change is another example of a global agreement on air pollution. Carbon dioxide is a pollutant, albeit a less immediately toxic one than, say, particulate matter. In 20 years, an agreement on carbon-dioxide emissions moved from putative to legally binding, and along the way the powerful message of the dangers of this pollutant has been clarified and articulated by scientists. In fact, since many of the most toxic air pollutants are associated with fossil-fuel burning, the structures in place to limit global warming will serve to reduce deaths from air pollution at the same time.

Besides these, many other international agreements could form the basis of a global agreement to limit air pollution. For example, the Montreal Protocol has successfully dealt with ozone-depleting substances, the Basel Convention on the Control of Transboundary Movements of Hazardous Wastes and their Disposal was drafted to prevent the export of toxic waste and has been expanded to plastics, and the Helsinki Convention limited pollution to the Baltic Sea from neighbouring states.

The need for a global agreement is such that in December 2021, the executive body of the UNECE convention on air pollution created a new working group, the Task Force and Forum for International Collaboration on Air Pollution, to "promote international collaboration towards preventing and reducing air pollution to improve air quality globally". It aims to take a "one atmosphere" approach to addressing international air pollution. The taskforce will hold its first meeting in October 2022, discussing such issues as "incentives and mechanisms for air quality management across administrative borders".

Bin Jalaludin is a public health physician and conjoint professor in the School of Population Health at the University of New South Wales, Sydney. He is also a lead investigator at the Centre for Air pollution, energy and health Research (CAR), a National Health & Medical Research Council (NHMRC) Centre of Research Excellence. He declares no conflict of interest.

The post Tackling air pollution at a global scale appeared first on 360.