In pictures: France ravaged by summer of wildfire and drought 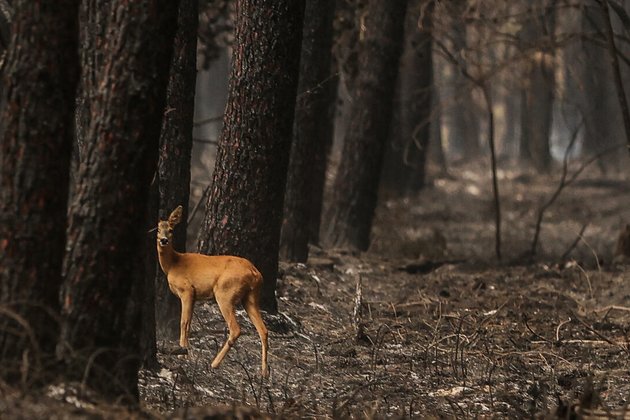 While rainfall on Sunday brought desperately needed relief to firefighters in the Gironde department near Bordeaux, wildfires elsewhere continue to burn though hundreds of hectares of French forests. Sunday marked the end of an intense heatwave that began on Wednesday, with storms forecast in 10 departments.

The extreme weather comes as France endures a record drought that has left parched villages without safe drinking water and set off warnings of a looming milk shortage this winter.

Click on RFI's slideshow of this summer's fire and drought emergency.

A fire that had been raging since Monday in the southern Aveyron region appeared to be under control and dying out on Saturday afternoon when it suddenly reignited in a "virulent" manner, gobbling up 500 more hectares (1,235 acres), the prefecture said.

At least 1,000 people were evacuated from the village of Mostuejols near the city of Millau and six nearby hamlets, it said.

Some 3,000 people had already been evacuated because of the fire, but were allowed back when it appeared under control. No casualties have been reported so far from the blaze, which has consumed a total of 1,260 hectares so far.

A local man was under investigation for accidentally starting the fire when a metal part of his trailer touched the road, sending off sparks that ignited the dried vegetation.

Who is setting France's forests on fire, and why? France's worst wildfires in 30 years force a rethink on managing forests

To limit such risks in eastern France, police said on Saturday they were banning entry to all but residents in most forests in the Bas-Rhin region near the German border.

Meanwhile in the southwestern Gironde region around Bordeaux, a huge fire that had flared on Tuesday was under control after rain fell overnight, a senior official said.

The situation "considerably improved during the night," Arnaud Mendousse, of Gironde fire and rescue, said.

He said there had been between 10 and 30 mm of rain in the region but on "terrain that is extremely dry".

"We know that this offers a respite but does no signify an end to the fight. We know that if it does not rain in the next 48 to 72 hours the risk will increase considerably."

Mendousse said the humidity level has gone up and the temperature was relatively low at around 25 degrees Celsius, (77 Fahrenheit) adding: "The fire is not completely out and the soil remains extremely hot".

Meteo France was forecasting lower temperatures and rain and thunderstorms for most of the country on Sunday.

In the northwest, in the legendary Broceliande forest in region of Brittany - where King Arthur roamed and where wildfires are normally rare - a fire was contained after rain fell overnight, but remained under watch after devastating 400 hectares, officials said.