Civilians killed in Russian shelling in Kramatorsk and Zaporizhzhia 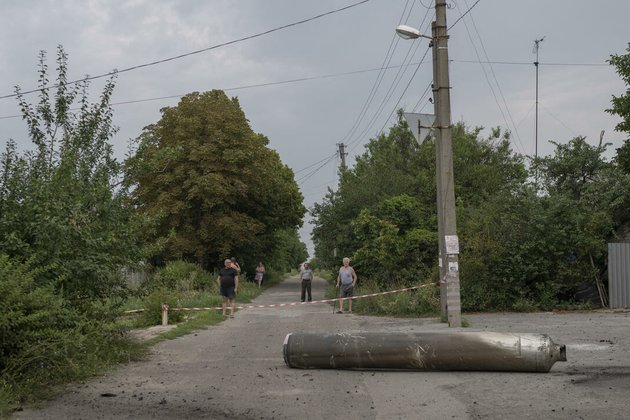 At least three people were killed and 15 wounded Friday in Russian shelling on the Ukrainian towns of Kramatorsk in the east and Zaporizhzhia in the south, according to initial counts by local authorities. Read FRANCE 24's coverage of the day's events as they unfolded. All times are Paris time (GMT+2).

This live page is no longer being updated. For more analysis of the war in Ukraine, click here.

Ukraine's military command said on Saturday that "fierce fighting" continued in Pisky, an eastern village which Russia had earlier in the day said it had full control over.

"The occupiers are trying to break through the defense of our troops in the directions of Oleksandropol, Krasnohorivka, Avdiivka, Maryinka, and Pisky," Ukraine's general staff said in its nightly briefing note on Facebook.

Kyiv and Moscow accused each other on Saturday of striking the Zaporizhzhia nuclear plant in southeastern Ukraine, which has been shelled repeatedly in the past week.

"Limit your presence on the streets of Energodar! We have received information about new provocations by the (Russian) occupiers," Ukraine's nuclear agency Energoatom said as it shared a message on Telegram from a local chief in Energodar city, where the plant is located.

"According to residents, there is new shelling in the direction of the nuclear plant," the message said.

But pro-Moscow officials in the occupied areas in Zaporizhzhia region blamed Ukrainian forces for the shelling.

"Energodar and the Zaporizhzhia nuclear plant are again under fire by (Ukrainian President Volodymyr) Zelensky's militants," said Vladimir Rogov, a member of the Moscow-installed administration. Rogov said that the missiles fell "in the areas located on the banks of the Dnipro river and in the plant".

Russia's Gazprom has ramped up flows to Hungary via the Turkstream pipeline that brings gas to Hungary via Serbia, a Hungarian foreign ministry official said on Saturday.

European Union member Hungary has maintained what it calls pragmatic relations with Moscow since Russia's invasion of Ukraine, creating tensions with some European Union allies keen to take a tougher line.

Ukraine's health minister has accused Russian authorities of committing a crime against humanity by blocking access to affordable medicines in areas its forces have occupied since invading the country 5 1/2 months ago.

"Throughout the entire six months of war, Russia has not (allowed) proper humanitarian corridors so we could provide our own medicines to the patients that need them," Liashko said, speaking at the Health Ministry in Kyiv late Friday.

"We believe that these actions are being taken with intent by Russia, and we consider them to be crimes against humanity and war crimes that will be documented and will be recognised," the minister said.

During the first five to six weeks of the war, Russia focused its attacks on the cities of Irpin, Bucha, Hostomel and Borodianka.

FRANCE 24's Rob Parsons says that life has been steadily returning to normal in these cities, apart from the fact that many houses still are in desperate need of repair and the lingering psychological trauma that continues to affect people.

8:44am: Two road bridges to Russian occupied territory in Kherson Oblast out of use, says UK

The two primary road bridges giving access to the pocket of Russian occupied territory on the west bank of the Dnipro in Kherson Oblast are now probably out of use for the purposes of substantial military resupply, British military intelligence said on Saturday.

Even if Russia manages to make significant repairs to the bridges, they will remain a key vulnerability, the UK's Ministry of Defence said.

"Ground resupply for the several thousand Russian troops on the west bank is almost certainly reliant on just two pontoon ferry crossing points," the ministry said in an intelligence update.

With their supply chain constrained, the size of any stockpiles Russia has managed to establish on the west bank is likely to be a key factor in the force's endurance, according to the update.

S&P cut Ukraine's rating to "SD" for selective default from "CC/C," noting that a majority of Eurobond holders had agreed to defer debt service payments by 24 months.

"Given the announced terms and conditions of the restructuring, and in line with our criteria, we view the transaction as distressed and tantamount to default," S&P said.

9:49pm: Civilians killed in Russian shelling in Kramatorsk and Zaporizhzhia

At least three people were killed and 15 wounded Friday in Russian shelling on the Ukrainian towns of Kramatorsk in the east and Zaporizhzhia in the south, local authorities said.

"New attack on Kramatorsk...two civilians dead and 13 wounded," Pavlo Kyrylenko, the governor of the Donetsk region, said on Facebook.

"The bombardment has damaged at least 20 buildings and a fire has broken out," he added, calling for remaining residents to evacuate.