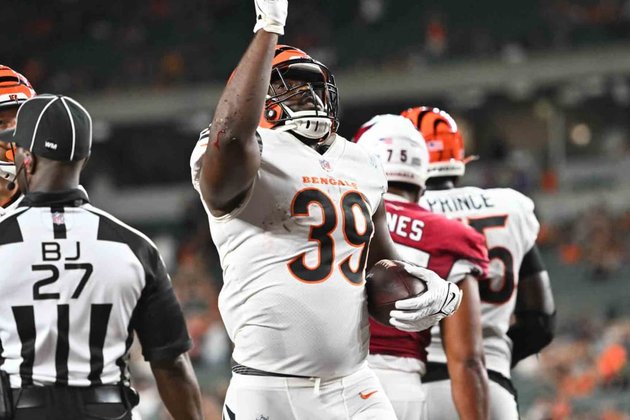 With the starters sitting for Friday night's preseason opener at Paycor Stadium, the Bengals couldn't avoid the three things they handled so masterfully last year on the way to the AFC title in a 36-23 loss to Arizona.

Injuries, penalties and turnovers by their backups hampered the Bengals' effort against the Cardinals' backups that started with quarterback Brandon Allen leaving with a concussion after the first series.

The lone star who took the field didn't disappoint a festive crowd converging on the building for the first time since the delirium of the AFC Wild Card win over the Raiders.

Off the greatest rookie season a kicker has ever had that included a Bengals-record 58-yarder, Evan McPherson kept it rolling with a 58-yarder and 56-yarder to go along with a 23-yarder that represented the Bengals' only points until running back Jacques Patrick bulled in for a one-yard touchdown with 7:33 left

Both operations had a hand in the kicks. Rookie long snapper Cal Adomitis threw it back to first-year punter Drue Chrisman to hold the 58-yarder before the vet combo of long snapper Clark Harris and punter Kevin Huber set up the 56-yarder.

Loveland, Ohio's Drew Plitt realized a boyhood dream when he quarterbacked the Bengals for the final 5:59 He hit all six of his passes for 76 yards, the last one a lovely storybook 25-yard touchdown pass dropped over the shoulder of rookie wide receiver Kendric Pryor at the goal line with 1:14 left.

The two punters alternated kicks and Huber probably got off the best one of the night early in the fourth quarter when he dropped a 49-yarder inside the 10 that got bobbled.

Huber, with Adomitis snapping, also hit the one that got returned 55 yards early in the third quarter that set up a touchdown. But Huber hit it pretty well down the middle and didn't get great coverage.

Running back Chris Evans' get-it-and-go 41-yard kick return was also a highlight on what-could-have-been night for the second-year player from Michigan. He had a 60-yard run and a five-yard touchdown wiped out by holding calls on tight end Thad Morris and ended up with minus-three yards on eight carries in a game the Cards front took it to Cincinnati and held the Bengals to just 39 yards rushing in the first three quarters.

The team that had the second fewest penalties accepted last season picked up four crushers for 70 yards in the first 16 minutes of the preseason (11 for 104 yards in the game) with one taking a touchdown off the board, they lost two offensive players on the first series and the Cards cashed a botched snap for a 21-yard touchdown drive.

They lost Allen on that grueling first series and the first play was Evans' 60-yard skirt-to-the-right to the edge negated by Moss. Adeniji was also called for the first of his two holds and Allen got sacked when the Cards went through the left side of the line.

Tight end Mitchell Wilcox also left with an ankle injury, making them real thin there with Drew Sample shelved for the next couple of weeks with a knee sprain. Later, rookie defensive tackle Tariqious Tisdale limped off.

Then on third-and-1 from the Bengals 4, McSorley rolled out, looked like he was going to run, pulled up and hit wide receiver Andre Baccellia for the touchdown running past safety Dax Hill, the Bengals first-round pick.

But Hill came back on the next series and broke up McSorley's third-down pass in the end zone and just missed an interception. Hill high pointed the throw to tight end Chris Pierce Jr. and when he brought it in as he was falling to the ground, Pierce was able to punch it out.

It led to Matt Prater's 27-yard chip shot field goal that gave the Cards a 9-0 lead late in the first quarter. They closed the half with two touchdowns, one coming shortly after quarterback Jake Browning and center Trey Hill mishandled a snap at the Bengals 21.

They went ahead, 23-9, when McSorley broke their back on third-and-six. The Bengals dialed up a Double A gap blitz and edge Raymond Johnson III stunted up the middle and had McSorley dead to rights. But they couldn't finalize the sack and McSorley scooted outside to loft a 36-yarder to Isabella that set up running back Jonathan Ward's one-yard touchdown.

Bengals draft picks Zach Carter (four tackles and tipped pass at the three technique) and Jeffrey Gunter (a sack on the edge, another hit on the quarterback and a tipped pass) were active on the defensive line in the first half. Dax Hill got his hands on two passes and had a tackle.

But except for wide receiver Trent Taylor's four catches for 74 yards, the Bengals offense couldn't do much with just 127 yards in the first half and only 18 of them on the ground. They gave up two sacks, both to linebacker Victor Dimukeje coming off the left edge.

Then when the Bengals re-shuffled the offensive line to open the second half (fourth-rounder Cordell Volson went to left guard), the right side got blown up as Evans lost six yards on the first play.

Patrick got some of those yards back in the fourth quarter with 30 yards on nine carries, but the Bengals still averaged just 1.8 yards per 23 carries by the backs.

Browning had a resourceful night in what had to be his busiest outing as a pro quarterback. He played all but the first and last series, went 13 of 24 for 190 yards and had a nice 31-yard look to Patrick taking advantage of a blown coverage. Browning also set up Patrick's touchdown with a highlight-tape-reverse-the-field-eight-yard scramble on third-and-five.