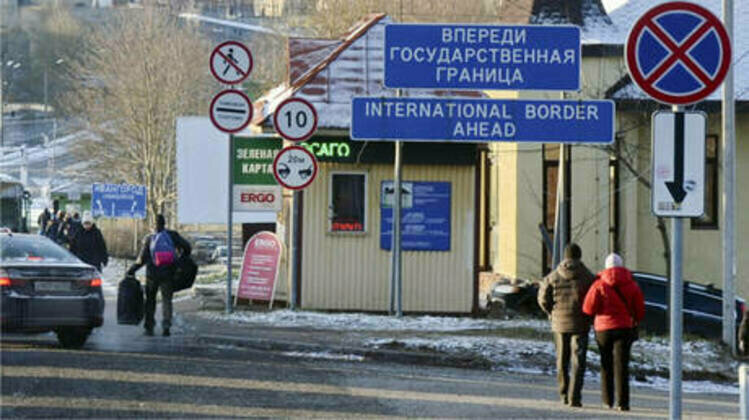 Officials in Brussels are skeptical of Zelensky's demand, now echoed by Estonia and Finland

Brussels seems reluctant to close EU borders to all Russian travelers, with one official telling the Financial Times on Tuesday that the bloc did not want a complete ban. This followed calls from leaders of Estonia and Finland to do so, echoing the demand by Ukrainian President Vladimir Zelensky.  Moscow called the idea "irrational" and said implementing it would expose the EU's true nature once and for all.

It's "not right" that Russians "can live a normal life, travel in Europe, be tourists," Finnish PM Sanna Marin told the state broadcaster Yle, accusing Moscow of waging "an aggressive, brutal war of aggression." While Finland might introduce its own travel ban, Marin added that she would "personally like to see European solutions to this question as well."

The statements from Kallas and Marin - both outspoken supporters of the government in Kiev - come after Zelensky told the Washington Post on Monday that the current sanctions against Russia were "weak" and that the only way to influence Russian President Vladimir Putin was a travel ban on all Russians, regardless of what they thought about the conflict, and a total energy embargo.

Brussels is currently not in favor of the idea, the Financial Times reported on Tuesday.

"You don't want to completely ban all Russians from traveling to the EU. How are we going to engage at all?" said one EU official, who was not named. "Russians not in favor of the war need to be able to travel too."

Anita Hipper, the European Commission's spokeswoman for immigration issues, told FT that the EU's partial suspension of the visa agreement with Russia "does not affect ordinary Russian citizens for the time being."

While member states have "significant leeway to decrease or stop issuing long-stay visas and residence permits," Hipper said there will always be categories for which visas should be issued, such as "humanitarian cases, for family members, journalists or dissidents."

Over in Moscow, the Kremlin has described people calling for a travel ban as "delirious" and the idea itself "irrational."

"They are stooping to sentiments that we heard literally 80 years ago from certain countries in the heart of Europe," Kremlin spokesman Dmitry Peskov told reporters, adding that he hoped the people who made these statements would "come to their senses" eventually.

"This would kill the whole idea of democracy, liberalism, freedom and, as they say 'zero tolerance' [of] xenophobia, nationalism and so on. If any EU countries do this, they will instantly admit their own nationalism, and no cosmetics will cover it up," Zakharova said in a 'Russia 24' TV interview on Tuesday.