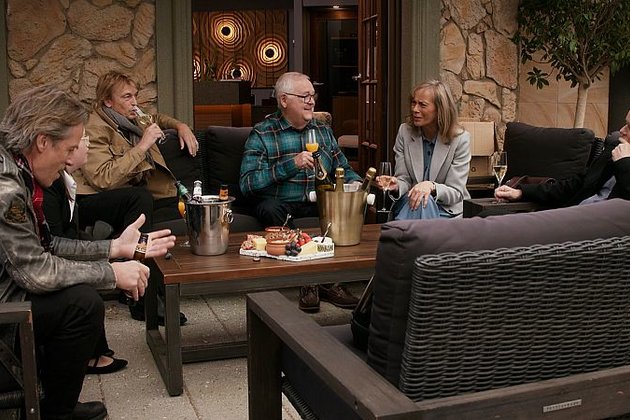 It lasted 5,955 episodes over 37 seasons, starting in 1985. Its anaemically thin plotlines, subpar acting, and emphasis on ideals bound to cause indigestion, did not prevent Neighbours from being mandatory viewing. Neighbours was, especially for British audiences, fetish and cult, shrine and devotion.

It also provided the first airings for an assortment of performers and actors who, in time, bloomed on the global stage, which, according to most Australians, means the United Kingdom or the United States: Kylie Minogue, Natalie Imbruglia in pop; Russell Crowe, Guy Pierce, Margot Robbie, in acting.

During its existence, writers tried to keep things lamentably interesting on Ramsay Street, located in the fictional Melbourne suburb of Erinsborough with an equally fictional, semi-tropical climate. There have been the drownings, plane crashes and necessary bushfires. There was the wedding between Minogue's Charlene (Minogue) and Jason Donovan's Scott.

There was another execrable wedding, if only in dream sequence, featuring the dogs Bouncer and Rosie, the canine next door.

Over time, the show has produced an almost mind-boggling array of studies and opinions, with Australian pundits wondering what their own citizens make of the drama. It has provided fodder for the cultural vice squads centred in academe, keen to note instances of racism or lack of diversity. It has given commentators a chance to make waves over a banal contrivance.

Now, it is popular to see the program as unevolved, white heterosexuality, trapped in the cage of suburbia.

There are, however, indulgent efforts to identify positive 'representations of gender, sexuality and feminism', if one was to believe academics Juliet Watson and Sarah Casey.

Take Charlene Mitchell, played by Minogue. She was 'the mechanic defying gendered career expectations with the "girls can do anything'"attitude'. Neighbours also produced the show's first trans character in 2019, and, in its final year, 'its first non-binary character, Asher Nesmith, played by non-binary actor Kathleen Ebbs'. How wonderfully modern.

If the series was to be captured in a snapshot analysis, the nightmarish suburbia so deliciously skewered by Arthur Koestler on his visit to Australia on full display, comes to mind. On a visit to the "faceless continent", the polymath intellectual observed that, for all its vast spaces and ocean beaches, 'Australia can give the visitor a feeling of claustrophobia'.

Even in 1969, he noted the frenzied rush of the country's residents from the city to the periphery. Admitting that the same phenomenon could also be observed in Europe and the United States, Koestler found Australia singular in effort. So much so 'that the very concept of the city is beginning to lose its meaning and "urban civilisation" is replaced by 'suburban civilisation'.

In Australian crowds, he also detected a conformism that produced a mass loneliness. They, his nose sensed, reeked of 'loneliness - you can feel it in the bus, in the pub, at the races, on the beach'.

Neighbours battles loneliness in forced fashion, and in doing so, gilds the suburban cage. It imports a provincial, romantic reading about Australia's brutish urban landscape. It assumes, fantastically, that there are neighbours who care with almost nosy dedication, whom you would actually like to know rather than regard with an air of suspicion.

Philippa Burne, sometimes writer for the series, can comment that, boring as that suburbia is, "for UK and overseas audiences it's a peaceful, privileged life where you can spend half the day in the pub and still pay the mortgage and not be a drunk".

Ian Smith, who played the character of Harold Bishop and also had a hand in script writing, put it this way:

Smith might be particularly fond of doctors in a way others simply aren't.

In fact, the fence, the boundary, the separation, are very important in an affluent society, selfish and concerned that another family, around the corner, might interfere and bother. Such sentiments are bound to prevail in a frontier society where territory was pinched and its indigenous inhabitants exterminated.

This face of Australia's existence has been exploited by the country's white bread demagogues since the creation of the Commonwealth in 1901. While solidarity is not unheard of in the Australian suburban context, any display of it is an exaggeration. It usually takes disasters such as cyclones, bush fires or floods to encourage it.

The traditional not-so-neighbourly Australian household is barricade and prison protection, a line marked against intruders.

The funding arrangements of the soap were eventually what undid it. Britain's obsession with Neighbours led to a mammoth slice of funding coming from UK sources. But it would not last, and UK's Channel 5 announced this year that it would be cutting supply.

A statement from the company accepted that many would be crestfallen at the demise of the series, but also suggested that investing in UK drama was the way to go:

Besides, the viewership in that country had plummeted from the stratosphere of 20 million regulars to a modest million. In Australia itself, audiences had also declined. After thousands of episodes, the series was only able to interest 100,000 daily viewers on Channel Ten.

FremantleMedia suggested putting the patient onto some form of life support, hoping for an injection of vital, life-reviving fluids. 'Our audience remains steady and Channel 10 would love the show to continue if we could find another broadcaster partner to replace C5,' an email from the company stated.

Unfortunately for devotees of this representation of Australia's suburban civilisation, the gap left by Channel 5's exit was simply too large to meet.

No other broadcasting partner was willing to subsidise the fantasy. This fictional Melbourne space is now liquidated and confined to celluloid soap land, with the last instalment aired on July 28.

The children in the UK will have to, as they have done for the most part already, shower their attention on something else.

Dr Binoy Kampmark was a Cambridge Scholar and is a lecturer at RMIT University. You can follow Dr Kampmark on Twitter @BKampmark.