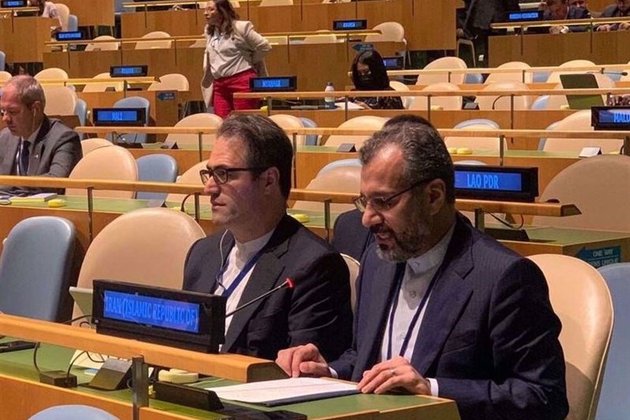 TEHRAN (Tasnim) - An Iranian diplomat deplored the US, France and the UK for disregarding the nuclear disarmament obligations, saying their nuclear policies have violated the spirit and objectives of the Treaty on the Non-Proliferation of Nuclear Weapons.

Asadollah Eshragh Jahromi, the director general for international peace and security in the Foreign Ministry of Iran, delivered an address on "Nuclear Disarmament" at the Main Committee I of the Tenth NPT Review Conference, held at the UN Headquarters in New York on August 5.

What follows is the full text of the speech by Eshragh Jahromi:

In the Name of God, the Compassionate, the Merciful.

At the outset, I would like to congratulate you on your election to the Chairmanship of this Committee and assure you of the full cooperation of my delegation. My delegation associates itself with the statement made on behalf of the Non-Aligned Movement.

The Islamic Republic of Iran is of the firm belief that the continued existence of nuclear weapons poses the greatest threat to humanity that due to the recent developments in Europe, has even intensified. The outcome of this Conference should reflect our deep concern about any use or threat to use nuclear weapons and declare that any use of such weapons is a crime against humanity and a violation of international law.

In 1996, the ICJ affirmed that nuclear-weapon States have an explicit obligation and special responsibility for achieving nuclear disarmament. To fulfill the mandate of this Committee, and to evaluate the implementation of article VI, it is necessary to examine whether the actions and policies of the nuclear-weapon States since 2010 have demonstrated a commitment to and compliance with the objective of article VI of the Treaty.

The NPT is facing a serious crisis of persistent non-compliance with disarmament commitments. Some examples of non-compliance in this regard are as follows:

First, despite the nuclear disarmament obligations under the NPT and the commitments made in the 2000 and 2010 NPT Review Conferences, the US nuclear policy increases the importance of nuclear weapons and the utility of retaining them, advocates tremendous build-up and modernization of its nuclear arsenal and delivery systems, allows the first use of such weapons, threatens to use them against non-nuclear-weapon States, and authorizes the development of new types of low-yield nuclear weapons, increasing the likelihood of their use.

Second, increasing the UK's stockpile of nuclear weapons by up to 44 percent, lowering the threshold for the possible use of such weapons, and reducing transparency about its nuclear weapons are fully incompatible with the spirit and objectives of the Treaty.

Third, is France, which is spending €37 billion on its nuclear weapons modernization program from 2019-2025 to develop a new generation of nuclear-powered ballistic missile submarines, ballistic missiles, air-launched cruise missiles, and their respective launch platforms. Such modernizations not only violate legal obligations on nuclear disarmament under Article VI but also turn article VI into a hollow promise. France also continues to actively oppose any reduction of the role and value of nuclear weapons or any effective measure that would restrict the possible use of nuclear weapons.

It is deeply disappointing that the nuclear disarmament obligations under the Treaty and the commitments assumed by the nuclear-weapon States in the 2000 and 2010 Review Conferences have remained unfulfilled. Our deep concern over the continued lack of progress in implementing article VI and commitments agreed upon at previous Review Conferences should be duly reflected in the report of the Committee.

The implementation of article VI is essential for the maintenance and credibility of the Treaty. The Review Conference should call for urgent compliance with legal obligations and fulfillment of commitments on nuclear disarmament by the nuclear-weapon States. The final document should commit all nuclear-weapon States to cease modernization programs of their nuclear arsenals and the development of new types of nuclear weapons systems.

The Conference should call upon nuclear-weapon States to enter into immediate negotiations on a verifiable, non-discriminatory, and comprehensive convention banning nuclear weapons and providing for their total elimination within a specified timeframe.

The Islamic Republic of Iran as a steadfast supporter of nuclear disarmament has actively fulfilled its obligations under article VI and has submitted a national report to this Conference (NPT/CONF.2020/28). Iran has also submitted a Working Paper on nuclear disarmament (NPT/CONF.2020/WP.43) which contains several elements for inclusion in the outcome document of the Conference.

Before concluding, I would like to underline that at this Review Conference, the first and foremost priority must be to adopt concrete decisions on nuclear disarmament. Any notion and proposal such as nuclear risk reduction continuing the status quo will have no chance of success.