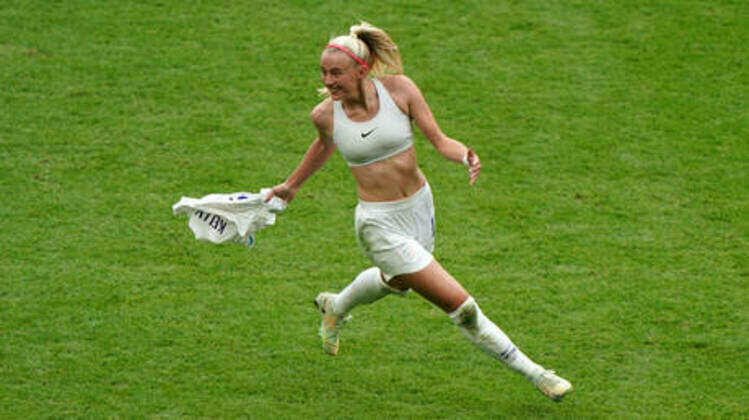 England women's star Chloe Kelly has vowed to frame the now iconic sports bra she displayed soon after scoring her team's winning goal against Germany in the final of Euro 2022 on Sunday.

Kelly, who plays for Manchester City's women's team in the England's Women's Super League, missed on a league medal with her club this past season (though she did pick up gold in the 2022 FA Women's League Cup Final) but was key to the England football team's first piece of silverware since the men's team won the World Cup in 1966.

And while her gold medal will surely take pride of place in her Manchester flat, the 24-year-old has also vowed to frame her sports bra - which she displayed to the more than 87,000 fans packed into Wembley when she ripped off her shirt in celebration and twirled it around her finger.

"I'm going to frame my boots, my shirt and, of course, my sports bra - absolutely everything," said Kelly, as noted by The Sun.

She also stated in the aftermath that the celebration wasn't pre-planned, but just something which came to her in the seconds after her goal.

"The celebration just came in the moment. I never thought of that moment happening. You don't expect it to happen, so I just went mental.

"I'm just soaking up all of these experiences. It's a once-in-a-lifetime experience. I hope our fans did that, too. To do this in front of our home fans is so special and a dream come true.

"I don't think it has truly sunk in. We won the Euros and I scored the goal. It's unreal."

Her achievement was all the more unreal given that her very participation in the tournament was under threat due to a serious knee injury she sustained last year, and which forced her to miss the Olympics.

Kelly's delirious celebration was also also referenced by Brandi Chastain, the former US women's team star who pulled off a similar celebration more than two decades ago in the 1999 World Cup final.

"Enjoy the free rounds of pints and dinners for the rest of your life from all of England. Cheers!"

And if it's a case of 'anything she can do, I can do better' Kelly clearly has designs on further trophies in her England career - even the biggest of them all, the one won by Chastain all those years ago.

"Looking at this medal makes you so much hungrier for more. The World Cup is around the corner. I want to win trophies," said Kelly.

"As a young girl, you grow up seeing people win trophies - and we're here doing that. One is not enough. We want more."