MONTRÉAL, QC / ACCESSWIRE / June 29, 2022 / St-Georges Eco-Mining Corp. (CSE:SX)(OTCQB:SXOOF)(FSE:85G1) is pleased to announce that, following three weeks of fieldwork and the completion of approximately 75% of the planned surface exploration campaign, several new pegmatites have been identified on the Company's Notre-Dame Project in Québec.

The Patro zone pegmatite was discovered near the center of the project and is characterized by two to possibly three horizons of 6 to 20 meters wide. The total length is still unknown. The second zone, the Team Zone, is located at the eastern limit of the Company's current claims block. Its average thickness is 2 to 3 meters and, although dislocated, can be traced over a distance of at least 300 meters.

Several pegmatite dikes have been identified at surface by the Company. Eighty samples were taken in the outcrops identified as pegmatite dikes. All the newly discovered dikes crosscut either gneiss or paragneiss. Furthermore, the carbonatite identified by the Québec government during a previous exploration effort in 2021, the 'Grand Lac Brochet' rare earth showing, has been resampled by the Company's contracted field geologists and sent to ALS laboratories for assays. The carbonatite horizon is 5 to 10m wide and can be traced over 75 meters of outcrop. The carbonatite seems to be linked to a North-South kilometric prospective structure.

A total of 210 samples were collected in this first exploration phase and sent to ALS laboratories for assays. All results are pending. The second portion of the initial phase of the exploration effort should allow the Company to define a detailed map for each zone of interest identified. Channel sampling, trenching, and an initial drilling campaign will be planned based on the results obtained from the completed phase of the exploration campaign. 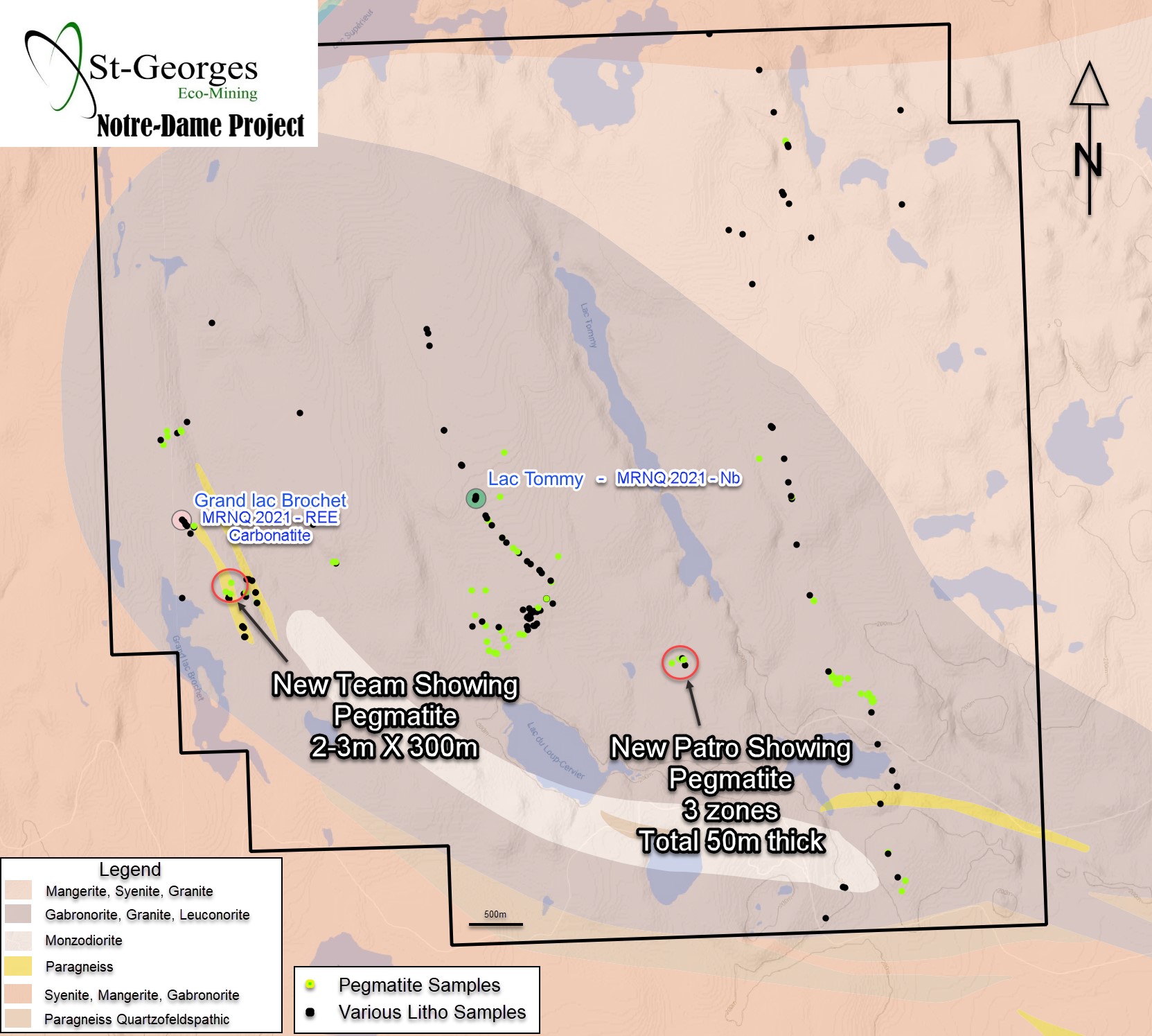 The Company has been active in advancing its battery recycling initiatives (Baie-Comeau plant, EU and USA potential feeder plants and partnerships) and its metallurgical efforts (lithium hydroxide production from sourced spodumene concentrate, lithium in clay technology). Additionally, the Company has hired website developers, branding specialists, and two media and governmental relations firms. Furthermore, the Company is in the process of hiring a financial advisory firm.

following a series of material events expected to be available shortly for public dissemination.

The technical information contained in this press release has been reviewed by Roger Ouellet (OGQ #790), an independent qualified person under National Instrument 43-101

ON BEHALF OF THE BOARD OF DIRECTORS

St-Georges develops new technologies to solve some of the most common environmental problems in the mining sector, including maximizing metal recovery and full circle EV battery recycling. The Company explores for nickel & PGEs on the Julie Nickel Project and the Manicougan Palladium Project on Quebec's North Shore and has multiple exploration projects in Iceland, including the Thor Gold Project. Headquartered in Montreal, St-Georges' stock is listed on the CSE under the symbol SX and trades on the Frankfurt Stock Exchange under the symbol 85G1 and on the OTCQB Venture Market for early stage and developing U.S. and international companies. Companies are current in their reporting and undergo an annual verification and management certification process. Investors can find Real-Time quotes and market information for the company on www.otcmarkets.com

The Canadian Securities Exchange (CSE) has not reviewed and does not accept responsibility for the adequacy or the accuracy of the contents of this release.