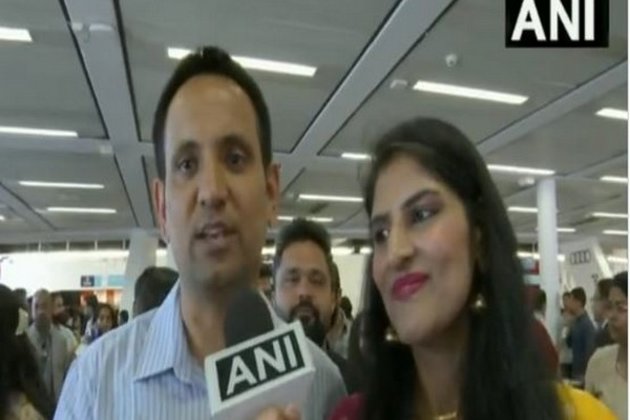 Munich [Germany], June 26 (ANI): People from the Indian diaspora in Germany expressed happiness after Prime Minister Narendra Modi addressed the community at an event in Munich.

"We are happy that PM Modi has come to Munich and we welcome him. This is a great opportunity to see him live and speak with him," one of the Indians who live in Munich told ANI.

"It is a sign of unity that PM Modi is here for the G7 Summit and we wish that he does so great things so that he will be a part of the G7 Summit and make all Munich Indians proud," another member of the Indan community said.

"Whatever the respect we are getting in a foreign country only because of PM Modi," one person said.

Earlier in the day, PM Modi received a grand welcome from the Indian diaspora at the Hotel in Munich on Sunday where he will be staying during his trip.

"Bharat Mata ki Jai" slogan reverberated at the hotel premises as people from the Indian diaspora cheered and waved their flags seeing the Prime Minister.

PM Modi arrived in Munich today to attend the G7 summit where he will hold meetings with G7 and partner countries and will hold discussions on issues ranging from environment, and energy, to counter-terrorism.

He was welcomed by a Bavarian band on his arrival in Munich. On the sidelines of the Summit, PM Modi will hold bilateral meetings with leaders of some of the participating countries.

"Besides participating in @G7 discussions on climate, energy, food security, health, gender equality and more, PM will also hold several bilateral meetings on the sidelines," the MEA said.The G7 Summit invitation is in keeping with the tradition of strong and close partnership and high-level political contacts between India and Germany.

After attending the G7 Summit, the Prime Minister will be travelling to United Arab Emirates (UAE) while coming back to India on June 28, 2022, to pay his personal condolences on the passing away of Sheikh Khalifa bin Zayed Al Nahyan, the former UAE President and Abu Dhabi Ruler. He will also congratulate Sheikh Mohamed bin Zayed Al Nahyan on his election as the new President of UAE.

This will be PM Modi's first meeting with Sheikh Mohammed bin Zayed Al Nahyan since his election as the new President of the UAE and the Ruler of Abu Dhabi. (ANI)