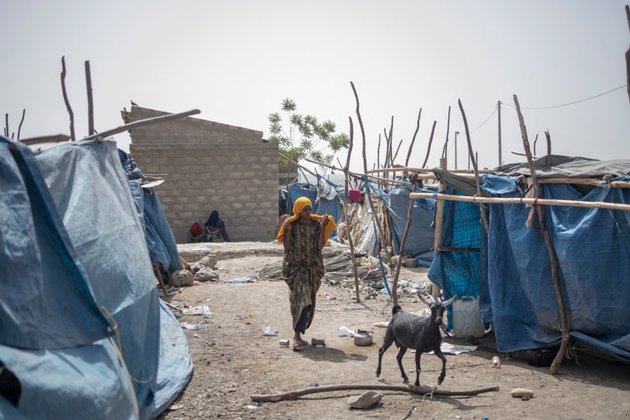 Semera, Ethiopia - Internally displaced persons in northern Ethiopia's Afar region have been leaving some camps due to lack of food and shelter. The U.N., warning that returning home may not prove any better, is calling for more international support.

Many people were forced to flee their homes because of fighting between Tigray regional forces and federal troops and their allies. Others fled record drought that has decimated livestock herds and left millions of Ethiopians hungry.

Myra Muhammed, a mother of three, walked 400 kilometers in January to reach a camp in Dubti, northern Ethiopia, only to find it overcrowded with 30,000 IDPs. The camp doesn't have enough food or shelter, leaving Muhammed debating whether to return home, though she and her family lack support there, too.

Muhammed is not alone.

Afar disaster officials say at least 8,000 internally displaced persons returned home in June because of shortages and the closure of one camp. FILE - A water jug is seen at the internally displaced persons camp of Guyah, Afar region, Ethiopia, May 17, 2022.

The U.N.'s refugee agency says since March, 12,000 IDPs in the region have returned home.

Idris Muhammad Abdullah, a local IDP leader at the Dubti site, said resources are scarce and show up in bits. There are times when aid is available to 400 or 500 households, he said, and other times to none, which creates conflicts.

Russia's war on Ukraine has taken global attention away from Ethiopia and driven up the cost of food aid.

The U.N.'s humanitarian affairs office in Ethiopia says it needs $3 billion to meet IDP needs, and those who return home may be worse off.

Michel Saad, head of the U.N. Office For the Coordination of Humanitarian Affairs for Ethiopia, explained: '(I)f they return somewhere where there's no health center, there are no schools, no access to water, water is not running. No electricity, no banking system, no telecommunication. I mean, obviously the situation is remaining very difficult.'

Meanwhile, IDPs in the camps wait in the scorching heat for help - rationed first to the most vulnerable.

Asia Hussein, a displaced mother of six, received food, but not enough. 'But what shall we do?' she asked.

At the moment, Ethiopians displaced by war and drought have no good options.

Tokyo suffers through heatwave, worst since 1875