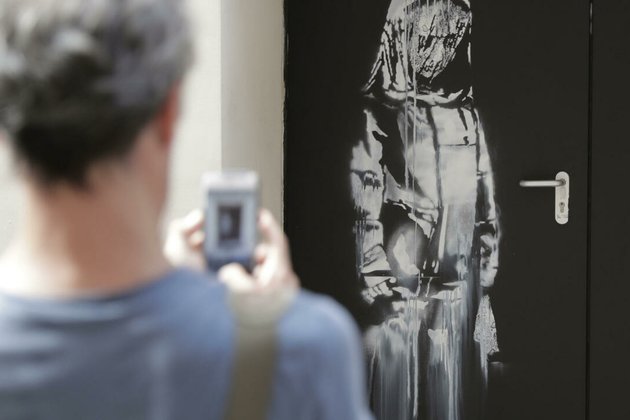 A French court on Thursday convicted eight men for the theft and handling of a Banksy painting, "the sad girl", paying homage to the victims of the 2015 attack on the Bataclan concert hall in Paris.

Three men in their 30s who admitted to the 2019 theft were given prison sentences, one of four years and two of three, although they will be able to serve them wearing electronic tracking bracelets rather than behind bars.

Another man, a 41-year-old millionaire lottery winner and street art fan accused of being the mastermind of the heist, was given three years in jail for handling stolen goods after judges found the main allegation unproven. His sentence will also be served with a bracelet.

Elsewhere in the capital, the defence was making its final arguments in the trial of the surviving suspects in the 2015 Paris attacks themselves, with a verdict expected on 29 June.

British street artist Banksy painted his "sad girl" stencil on the metal door of the Bataclan in memory of the 90 people killed there on 13 November 2015.

A white van with concealed numberplates was seen stopping on 26 January, 2019 in an alleyway running alongside the central Paris music venue.

On the morning of the theft, three masked men climbed out of the van, cut the hinges with angle grinders powered by a generator and left within 10 minutes, in what an investigating judge called a "meticulously prepared" heist.

Prosecutor Valerie Cadignan told the court earlier this month that the perpetrators had not sought to debase the memory of the attack victims, but "being aware of the priceless value of the door were looking to make a profit".

During the trial, Bataclan staff said the theft sparked "deep indignation", adding that the painted door was a "symbol of remembrance that belongs to everyone, locals, Parisians, citizens of the world".

Investigators found it in Italy in June 2020 on a farm in Sant'Omero, near the Adriatic coast.

Three men involved in transporting the door were each jailed for 10 months, while a 58-year-old Italian man who owns a hotel where it was temporarily stored received a six-month suspended sentence.