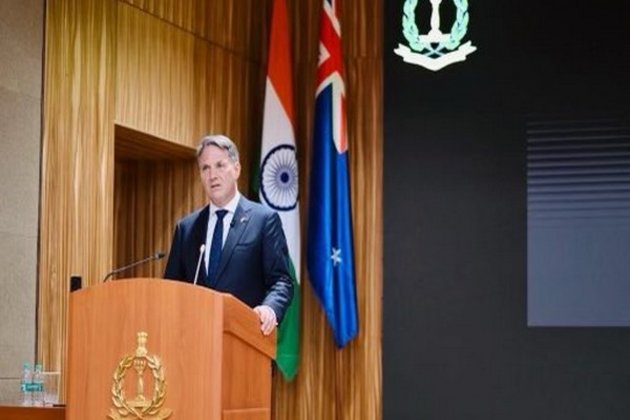 New Delhi [India], June 22 (ANI): Australian Defence Minister Richard Marles on Wednesday said the "assault on Indian forces" along the Line of Actual Control with China in 2020 was a warning that the world should heed. He also noted that Beijing's military build-up is the most ambitious by any country since the end of the Second World War.

In a speech at National Defence College here, Marles said his visit reflects the conviction and the commitment by the Albanese Government to place India at the heart of Australia's approach to the Indo-Pacific and beyond.He said geography of Australia and India makes the two countries stewards of the Indian Ocean region.

"It's an ocean which accounts for about half the world's container traffic and is a crucial conduit for global trade. India's location makes it the natural leader of this region which Australia strongly supports."He said Australia does not question the right of any country to modernise its military capabilities consistent with its interests and resources but large-scale military build-ups must be transparent and they must be accompanied by statecraft that reassures.

"China's military build-up is now the largest and most ambitious we have seen by any country since the end of the Second World War. It is critical that China's neighbours do not see this build-up as a risk for them. Because without that reassurance, it is inevitable that countries will seek to upgrade their own military capabilities in response," he said.

Marles, who is also Australia's Deputy Prime Minister, said insecurity is what drives an arms race and India's own experience illustrates this maxim more than most.

"The assault on Indian forces along the Line of Actual Control in 2020 was a warning we should all heed. Australia stood up for India's sovereignty then and continues to do so now. It is vital that China commits to resolving this dispute through a process of dialogue consistent with international law. The global rules-based order matters everywhere, including in the highest place on earth," he said.

The Australian Defence Minister said as India and Australia continue to lift their defence and security cooperation, exploring longer-term reciprocal access arrangements is the logical next step.

"It will not be lost on any of us that deeper Australian-Indian security cooperation is often seen as a response to a rising China. There is nothing remarkable about two democracies working together in response to strategic change. But it would be wrong to assume, as some commentators tend to, that China is at the centre of every decision," he said. .

Speaking on the Russia-Ukraine conflict, Marles said the return of war in Europe is another warning. He said he has not come to India to lecture India on how it should respond to this conflict, or how it should manage its relationship with Russia.

"But Russia's war on Ukraine does teach us that we cannot just rely on economic interdependence to deter conflict; and that deterrence can fail when one country's determined military build-up creates an imbalance of military power. An imbalance that encouraged President Putin to conclude the benefits from conflict outweighed the risks," he said.

The Australian Defence minister said that Canberra's investments in deterrence capabilities, including long-range and precision strike weapons, are a necessary and prudent response to the military build-up in the Indo-Pacific region.

"These investments are not only about Australia's security - they are about the region's security as well. And they will make Australia a more valuable and potent partner for our allies in the Indo-Pacific," he said.

Marles arrived in India on Monday on a four-day visit. The Australian Defence Minister held a bilateral meeting with his Indian counterpart Rajnath Singh on Wednesday as both sides reviewed the regional security situation and reaffirmed their shared objective of an open, free and rules-based Indo-Pacific region. (ANI)