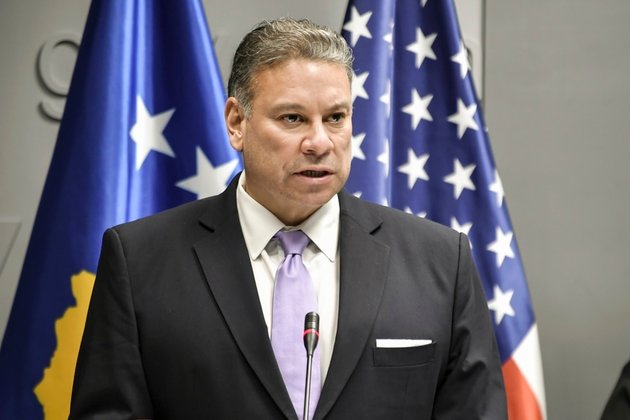 All prior agreements reached under the framework of the European Union-led Kosovo-Serbia dialogue must be implemented, U.S. special envoy Gabriel Escobar said on February 2 at the end of a visit to Kosovo's capital, Pristina.

Escobar, speaking at a joint news conference with EU Special Representative Miroslav Lajcak, was referring to an agreement on creating an association of Serb-majority municipalities -- an issue which has become a stumbling block in the EU's efforts to push the dialogue between Serbia and Kosovo forward.

The EU has repeatedly called for the association to be established, saying it's Kosovo's obligation under the Brussels Agreement reached in 2013.

Escobar and Lajcak visited Kosovo and are going to Serbia later this week to encourage the two sides to continue the dialogue on normalizing relations facilitated by the EU.

But the current Kosovar government of Prime Minister Albin Kurti insists there can be no association based on ethnicity or anything along the lines of Republika Srpska -- the Serb-dominated entity in Bosnia.

Kosovo declared independence from Serbia in 2008 after a 1998-99 conflict between ethnic Albanian separatists and Serbian forces. Belgrade doesn't recognize Kosovo and around 120,000 ethnic Serbs living in Kosovo want to be part of Serbia.

The EU has stressed it was willing to organize a new meeting once the Serbian and Kosovar sides showed a willingness to achieve concrete results.

"We did not come here with a set of prescriptions of proposals that we would like to impose,' Escobar said.

'In fact, we are asking the two parties to be constructive, to provide their own visions what the [Serb-majority municipalities] association should look like, and then negotiate from there, within the framework of the dialogue", Escobar added.

The U.S. envoy added that initiatives such as establishing the association are not intended to target Kosovo's statehood, and said Washington was willing to help the two sides find a mutually beneficial solution.

In turn, Lajcak reiterated that no one intended to establish any Republika Srpska-like entity in Kosovo.

"If we want to end the existence of parallel structures, if we want transparency in financial flows, if we want clear rules in the [majority-Serb] north, this could be all done within the constitutional and legal system in Kosovo," said Lajcak.

Lajcak said both the United States and the EU want to see Kosovo and Serbia to turn a new page, leave the past behind, and normalize their relations.

"Normalizing relations between Kosovo and Serbia will not only solve unresolved issues, but it will also contribute to the stability in the region and will deliver very concrete benefits to the citizens that must be tired of the status quo," Lajcak added.