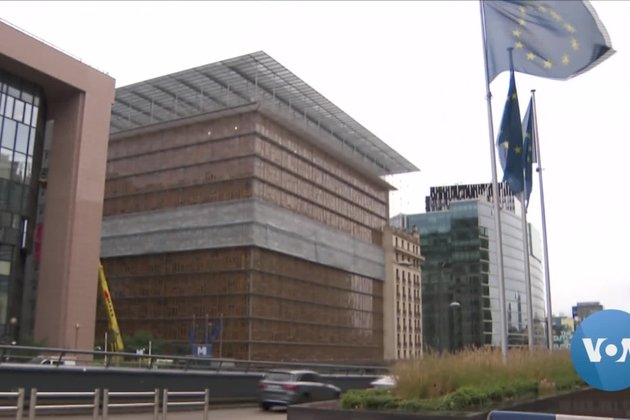 LONDON - As the United States and Russia met for talks in Geneva this week, the future security of Europe was at stake. But absent from the negotiating table was the European Union, to the clear frustration of the bloc's officials.

"On this dialogue, there are not two actors alone. It's not just U.S. and Russia. If you want to talk about security in Europe, Europeans have to be part of the table," EU foreign policy chief Josep Borrell told reporters January 5.

Borrell made the comments following a visit to the front lines of the conflict in eastern Ukraine, where Russian-backed rebels continue to fight Ukrainian forces nearly seven years after Moscow's forceful annexation of Crimea.

The EU is late to the table, says analyst Liana Fix, a resident fellow at the German Marshall Fund in Washington.

"The problem here is that the European Union has not been involved formally in talks in 2014 when the Ukraine crisis started. Back then we had Germany and France in the Normandy format [talks] and no official EU representative," Fix told VOA.

"On the other side, the European Union should make it clear what it can contribute to the discussion," she said. "Within the European Union, the question is: Who is more powerful - the member states or the EU as an institution itself? And on the other hand, in Moscow, the EU is not taken seriously."

FILE - Russian paratroopers march the Victory Day military parade in Red Square marking the 76th anniversary of the end of World War II in Europe in Moscow, May 9, 2021. The amassing of Russian troops and equipment near Ukraine's border has caused worries in Kyiv and in the West that Moscow could be planning to launch an invasion.

There are fears the smoldering war in eastern Ukraine could be about to reignite. In recent months, Russia has massed over 100,000 troops close to the Ukrainian border, prompting Western fears of an imminent invasion. Meanwhile, Moscow complains of a NATO military buildup in Eastern Europe and has warned of the dangers of confrontation.

Those tensions came to a diplomatic head this week. But neither the U.S.-Russia bilateral talks nor Wednesday's summit between NATO and Russia - the first such meeting in two years - appear to have yielded progress.

Amid a changing world order and rising geopolitical tensions, France is leading a European push for what Paris calls greater "strategic sovereignty," partly driven by doubts about America's commitment to NATO that took root during the administration of former President Donald Trump.

"He has no consideration for the European Union, and he is totally determined to try to put dents in European unity, which is solidifying," Le Drian told BFM TV.

Without its own military force, the European Union as an institution may not be taken seriously by Moscow - but it does have a key role to play, said Fix.

"I think one of the things that Russia has done, which it probably did not expect, it has brought all of Europe, NATO and non-NATO allies alike, together, to share the same set of principles, the same ambition, the same hopes and the same commitment to diplomacy," she told reporters.

SYDNEY, NSW, Australia - Stocks in Asia were mixed on Monday as investors fretted over this week's meeting of the ...