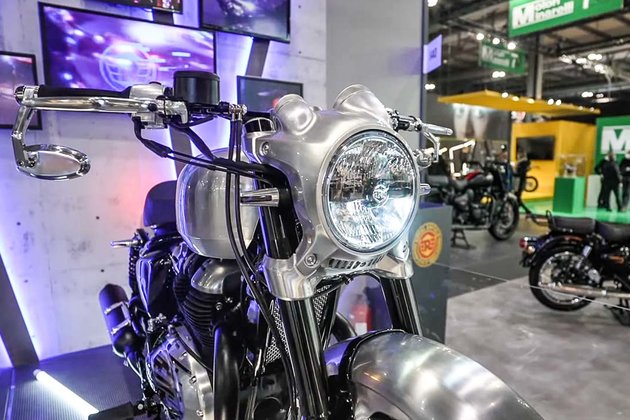 Royal Enfield is one of the primary Indian motorcycle brands which is popular at a global level. They have always generated high anticipation at the biennial auto event. This time too, Royal Enfield fans had their eyes glued to the onset of 2021 EICMA in Milan, Italy as there were expectations of something new.

At the latest edition of EICMA, Royal Enfield has pulled out a surprise by revealing the SG650 Concept. The pre-production prototype previews a 650cc single-seater bobber which is likely to turn into a production model soon. The model looks slightly different from the 650cc cruiser spotted testing on Indian roads on numerous occasions previously.

As we already know, Royal Enfield is developing multiple new models based on the 650cc platform. One of them is a 650cc cruiser motorcycle which is speculated to be named Super Meteor 650 since it will serve as an elder sibling to Meteor 350. The other model spotted in recent times is a 650cc roadster which is believed to share styling elements with Classic 350.

In all probability, the SG650 Concept could give birth to the 650cc equivalent of Classic as it shares plenty of design details with the latter. The low-set and wide handlebar, centre-set footpegs and a single rider seat indicate that it mimics the styling of Classic 350. The seat wears a premium hand-stitched black leather. Take a look at the detailed first look walkaround video, credit to Gagan Choudhary.

Like other Royal Enfield motorcycles, SG650 gets several retro styling highlights such as a round headlamp and taillamp, a teardrop-shaped fuel tank, bar end rearview mirrors and chunky front and rear fenders. Components such as the fuel tank and wheels have been carved out of a CNC billet machine whereas the former gets a retro-styled polished aluminum finish with digital graphics.

Mechanical specifications of SG650 Concept will be identical to the upcoming 650cc cruiser which will receive the same upside-down front forks and twin shock absorbers at rear. Braking duties on the motorcycle will be carried out by single disc brakes at both ends that will be aided by a dual-channel ABS as standard.

Powering the SG650 bobber concept will be a 648cc parallel-twin engine which currently powers the 650 Twins- Interceptor and Continental GT. This motor kicks out 47 bhp and 52 Nm of peak torque and will be mated to a 6-speed gearbox with a slipper and assist clutch.

In terms of features, we expect Royal Enfield to offer a semi-digital instrument panel that comprises a Tripper Navigation pod for turn-by-turn navigation. Other features such as all-LED lighting, USB charger and Bluetooth connectivity should also be offered since this model is likely to sit on top of the current 650 Twins.