Normandy village takes a gamble on letting in the rising sea 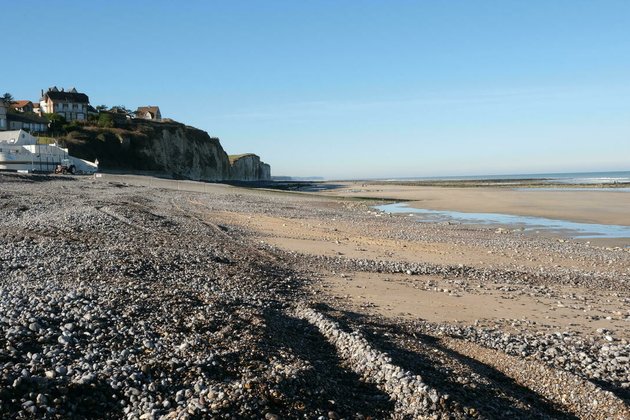 Sea levels are expected to rise a metre by 2100 as a direct consequence of global warming. This will be a key topic at the UN's COP26 environmental summit, which begins Sunday in Glasgow. French organisations and communities are already hard at work on finding solutions to the imminent flooding. The French village of Quiberville-sur-Mer in Normandy has opted for an unconventional approach: letting the sea in instead of building walls to keep it out.

Houses perched on chalk cliffs facing the English Channel overlook waves crashing loudly on a pebble beach. Fields, crisscrossed by the River Saâne, extend as far as the eye can see in this commune in France's northern Normandy region. The small village of Quiberville, with a summer population of 2,400 and barely 550 in winter, bustles with life on a late October morning. Local residents and tourists are out on the beach, enjoying a beautiful autumn day. With the sunshine, tourists and rolling fields, it's easy to forget the sword of Damocles hanging over this small community: the rising sea.

If global warming continues on its current trajectory, sea levels could rise by as much as one metre by 2100, according to the latest predictions from UN climate experts. This would profoundly transform the French coastline - and Quiberville is on the front line.

"The town is already at risk, both of flooding from the sea and flooding from the Saâne on the land side. We also have the problem of cliff erosion," said Stephane Costa, a University of Caen professor who has been studying the eroding coastline in Normandy for decades, in an interview with FRANCE 24.

"This will be further exacerbated by global warming. Not only will the rise in sea level increase the risk of flooding, but it will also prevent the river from draining. At the same time, more waves will hit the bottom of the cliffs and accelerate erosion," he explained. "High tides and storms will also increase in number and intensity."

In an attempt to work with the sea rather than against it, Quiberville is at the centre of a project that is unprecedented in France. Instead of erecting barriers or walls to protect itself from the mounting waves, the town has decided to let the sea come in. With the help of EU and French state funding, it has embarked on a major reorganisation that includes moving some houses in an attempt to adapt to the reality of living with global warming.

The village was once protected by a large road that acted as a dyke between the beach and the land with the river passing through a "nozzle", a type of narrow funnel, to reach the sea. The bottoms of the chalk cliffs were reinforced with concrete for several metres as a protection.

From 2025 onwards, the nozzle will be replaced by a wide bridge. This will make it easier for the river to reach the sea and, crucially, for the sea to flow into the land during high tide.

One main goal of this measure is to reduce flooding. "This new channel will increase the flow of the river at low tide and therefore limit the risk of it flooding," Regis Leymarie, assistant director of the Conservatoire du Littoral group that is behind the project, explained to FRANCE 24. "In the other direction, the sea will be able to penetrate the land in a controlled manner."

The second goal is that "creating points of contact between freshwater and seawater allows for an explosion of biodiversity", said Leymarie. "This is going to restore spawning grounds for fish and nursery areas for birds."

Since 2017, the Conservatoire du Littoral - a public organisation devoted to ensuring the protection of coastal areas and lake banks - has been working on the "flexible management of the coastline" at 10 different locations in France, with projects aimed at returning reclaimed land to the sea. In the Bay of Lancieux in Brittany, for example, rather than repairing a dyke, the group aims to let water enter agricultural polders to create salt meadows.

From 'resistance' to 'adaptation'

The new project marks a complete policy shift for Quiberville's longtime mayor, Jean-Francois Bloc. Since he became mayor 34 years ago, Bloc had one word in mind when people talked to him about rising waters: "Concrete".

"It was always concrete, concrete and more concrete, to better resist," he explained to FRANCE 24. But as the weather patterns changed, so did his approach. "It took me a while, but I finally understood that we will not be able to keep going like we were indefinitely."

The son of a local butcher, Bloc has witnessed the fragility of the area's existing systems on a number of occasions. In 1977, a storm coincided with a very high tide to cause severe damage to the dyke. Twenty-two years later it was the Saâne's turn to overflow, swollen by heavy rain that causing major flooding in 1999.

"I had to help people get out of their houses through the windows and deliver food to people in a dinghy," he recalled. Fading notices that show how high the water level reached during those floods are still posted on various buildings in the town.

"Every time there is a storm we rebuild, and we make it stronger," said Bloc. "But as the water rises, and as the storms get stronger and stronger due to global warming, it's clear that this is not enough anymore."

Walking along the dyke, there are clear signs to confirm Bloc's conclusion. In one place, a boulder has been forced off its axis. "It was pushed by the waves during high tides," explained the mayor. A little further, cracks have appeared the road. "I have finally come to terms with all this. We must no longer resist, we must accept the reality of this rising water and adapt ourselves to it," he said.

"With the rise in water levels predicted by scientists, the retreat inland will be unavoidable," agreed Costa. "By protecting the coastline, we are only buying a little time."

The Quiberville project is innovative and makes sense, according to Costa. "It shows that by anticipating, we can put in place intelligent and attractive projects for the reorganisation of the territory," he said.

A first step involves moving a municipal campsite located only a few steps from the sea, just behind the dyke road. "In 1999, just after we had finished renovating it, it was completely destroyed. The water reached 1.6 metres - the caravans were floating," said Bloc. The campsite will be completely dismantled by 2024 and a new one will be built 700 metres higher up the cliffs of Quiberville.

Although he is convinced it is the right thing to do, the mayor does not hide his concern. "This campsite is a very important part of our livelihood, it is one of our main sources of income and our main economic activity. It alone represents eight jobs. That's no mean feat for a village like ours," he explained. "Some people have been coming to the campsite for over 50 years. Obviously, for them, this is a difficult decision to accept."

Discussing the site of the future campsite, Bloc manages a smile. "But it is also an opportunity to renew ourselves. The new campsite will be more modern, more geared toward motor homes. There will be mobile homes, a swimming pool," he said.

High up on the white chalk cliffs of Quiberville, the houses are also under threat as a result of erosion. When asked about this problem, Bloc is much more defeatist. "We can do all we want, we won't be able to do much more than slow down the process," he said dolefully.

"Erosion eats away about 40 centimetres of the cliffs every year," explained Costa. "At the bottom, the waves hit the cliff and weaken it. At the top, it's the pressure of urbanisation and rainwater infiltration that cause concern."

Bloc has already had to ask three families to leave their homes for safety reasons; the last time in July 2020. "Today, when someone comes to see me for a purchase project on the cliff, I don't lie. I warn buyers that they will only be able to see a beautiful sunset for the next 20 or 30 years."

In total, around 40 houses in the department are at risk of collapsing under the pressure of erosion, according to 2020 estimates by the Centre for Studies and Expertise on Risks, the Environment, Mobility and Urban Planning (Cerema) and the Seine-Maritime Departmental Directorate of Territories and the Sea (DDTM).

What will Quiberville look like in 20, 30 or 50 years? The cliffs will have significantly retreated but underneath will be "a beautiful natural space, where many tourists will come to stroll to observe migratory birds and enjoy the sea", Leymarie said optimistically.

This article was translated from the original in French.