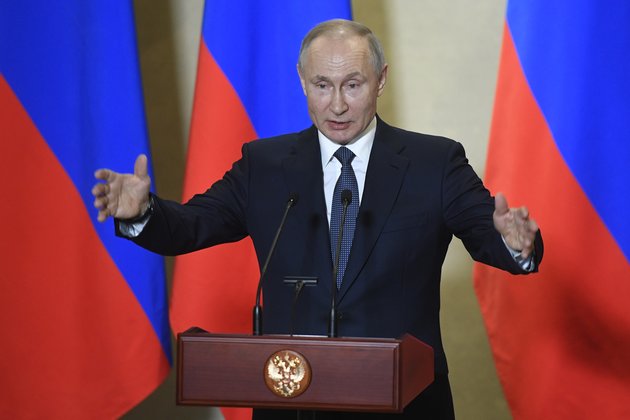 MOSCOW - Russian President Vladimir Putin indicated a nationwide vote on constitutional amendments that would open the door to extending his power might face delays because of concerns about the coronavirus pandemic, which has affected Russia little but ravaged other parts of the globe.

"I really am counting on people to show up on April 22 and support the changes," Putin said in a Wednesday speech that was meant to mark the sixth anniversary of Russia's annexation of the Crimean Peninsula but touched on the vote set for next month.

"Although, if there will be problems connected to this well-known coronavirus, then the law allows us to calmly ... move it to a later period," he said. "If the epidemiological situation allows, we'll hold the national vote. If not, then we'll postpone a bit."

At the heart of the issue: a controversial referendum over reforms that, among other measures, would allow the Russian leader to retain his post and compete in future presidential elections when his current term ends in 2024.

Yet the move - widely seen as an effort to legitimize Putin's hold over Russian political life well into the next decade - has run into an unexpected foe in the form of a pandemic that demands social distancing and thinning of crowds to avoid mass contagion.

Critics say the growing dissonance between government efforts to respond to the virus and the Kremlin's rush to push through with the vote has revealed the constitutional reforms as nothing short of an orchestrated coup.

"The left hand is closing everything, and the right is demanding 24 hours a day, is demanding we come to the booth and vote," said Matvei Ganapolsky, a commentator on Echo of Moscow radio and vocal critic of the referendum.

Thus far, Russia has been spared the brunt of coronavirus infection - a move government officials have chalked up to smart policies but critics worry may reflect underreporting.

A government task force on Wednesday reported 33 new infections in Russia over the previous 24 hours, bringing the total number of cases to 147, with no confirmed deaths.

"It's well-known to us that viruses know no government borders," Putin said in addressing his cabinet Tuesday at the Kremlin. "Despite the potential high risks ... the situation is, on the whole, under control."

Yet scientists continued to question how it was that Russia, the world's largest country by land mass, had so few cases when it shares borders with coronavirus-ravaged neighbors in China and Europe.

For weeks, rumors have circulated of Russian authorities reclassifying coronavirus cases as flu or pneumonia to prevent public panic.

Yet PRC News, an online Russian scientific portal devoted to molecular studies, suggested the sole Russian laboratory behind testing for coronavirus was using an unproven method likely to produce false negatives for the contagion.

"As a result, official statistics may incorrectly reflect the epidemiological situation, and the measures taken - inadequate to the real threat," wrote the article's authors, Elena Kleshenko and Alexei Torgashev.

True or not, that point of view reflected fears that Russia's fragile health care system could be quickly overwhelmed by sick patients.

The government continued to ramp up efforts to fight contagion, with signs that coronavirus was beginning to disrupt nearly every aspect of daily life.

On Wednesday, Russia officially closed its borders to international travelers until May 1, a move that, while targeting only foreign nationals, appeared to create problems for Russian passengers trying to return home. Russian media carried reports of Russian travelers stranded because of canceled flights. The Russian prime minister also announced that all planes flying routes to the U.S., Britain and United Arab Emirates would be suspended.

The government announced schools would be closed nationwide March 23 through April 12, with students encouraged to stay home and study through online courses.

Russia's Orthodox Church introduced measures aimed at containing the spread of infection, including instructing followers to refrain from the common practice of kissing icons. In a related move, the Moscow Patriarch issued an order for priests to discourage worshippers from kissing their hands.

The U.S. Embassy in Moscow announced it was temporarily cutting back on visa and other services out of concern for its American and Russian staff.

There were reports of consumer runs on meat, pantry items and other key supplies.

Yet, on social media, users mostly swapped ideas - and jokes - on how to spend the coming weeks quarantined in Russia's traditionally small, cramped apartments.

"It's not so bad to sit under quarantine, only there's one thing I don't get: why does one packet of buckwheat hold 2,082 kernels and another 2,947?" asked one user in a widely shared tweet joking about a staple grain of the Russian diet.

His point? He, like many others around the world, was now at home with plenty of time to kill.

Trump back playing golf as U.S. returns to 'normal'

Washington D.C. [USA], May 24 (ANI): US President Donald Trump on Saturday was seen golfing at his Virginia club, marking ...

How U.S. led the world in failure to prepare for pandemic

On March 20, just after the World Health Organization (WHO) declared a global pandemic on March 11, the U.S. National ...

WASHINGTON, DC May 23 (Xinhua) - The domestic drivers for the Chinese economy are looking much better and Chinese domestic ...