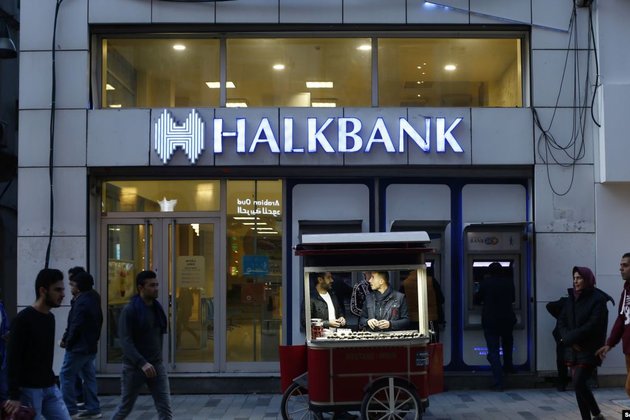 WASHINGTON -- Majority state-owned Turkish bank Halkbank has been criminally charged in an indictment for involvement in a multibillion-dollar scheme to evade U.S. sanctions against Iran.

Prosecutors in New York on October 15 alleged the bank had protection from high-level Iranian and Turkish government officials as it engaged in widespread fraud and money laundering using a vast, complex network of front companies to help Tehran shift billions of dollars in oil revenue illegally.

Assistant Attorney General for National Security John C. Demers said the violations were one of the most serious Iran sanctions violations his office has seen.

Prosecutors in particular said that between 2012 and 2016, the Turkish bank enabled Iran to spend proceeds from oil and gas sales on international markets in violation of U.S. sanctions.

The charges mirror those that one of Halkbank's former executives, Mehmet Hakan Atilla, faced and who was found guilty and sentenced to prison last year.

A star witness in the case was Turkish gold trader Reza Zarrab, who said he had helped Iran access funds from overseas oil sales that were frozen in foreign accounts.

After he was taken into custody in 2016, Zarrab included Rudy Giuliani, President Donald Trump's personal attorney and confidante, to his legal team.

In that capacity, Giuliani tried to get Zarrab exchanged for an American pastor, Andrew Brunson, who was being held in Turkey.

He also in 2017 urged Trump to ask then-Secretary of State Rex Tillerson to have the Justice Department drop its case against Zarrab, Bloomberg News reported last week.

Giuliani, a former New York mayor and prosecutor, subsequently has said his role as Zarrab's lawyer was ethical and legal.

With reporting by AP, Reuters, and Bloomberg

Coronavirus more closely aligned to flu than other viruses

CHICAGO, Illinois - Scientists in China who studied the nose and throat swabs from 18 patients infected with the new ...