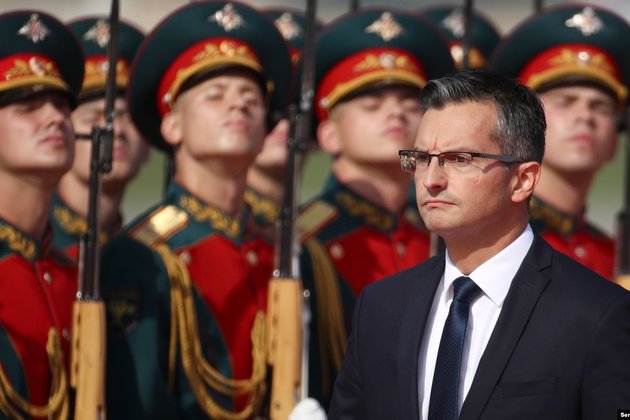 Slovenian Prime Minister Marjan Sarec has arrived in Moscow on a two-day visit during which he will hold talks with his Russian counterpart, Dmitry Medvedev.

Medvedev and Sarec, who is accompanied by several ministers and business executives, will discuss on September 10 'the entire range of bilateral cooperation in trade, the economy, energy, investment and high-tech sectors, as well as cultural and humanitarian collaboration,' the Russian government website said in a statement.

'The Russian market is very interesting for us. And certainly, we will seek to find new opportunities for cooperation' despite European Union sanctions imposed on Russia over its actions in Ukraine, TASS quoted Sarec as saying ahead of his visit, which his office said will focus on economic cooperation but also on foreign policy topics.

Sarec and Medvedev are also expected to attend the ceremonial unveiling of a monument dedicated to Slovenians who died on Russian soil during both world wars.

It is not known whether the Slovenian prime minister will be received by President Vladimir Putin, Slovenia's news agency STA reported.

Slovenia's parliament appointed Sarec, a political novice, as the country's youngest prime minister in August 2018. He is a former mayor of Kamnik where he also was a volunteer firefighter.

He previously worked for public broadcaster RTV Slovenija and became known for imitating the voices of politicians in parody shows.

Based on reporting by STA, Total Slovenia News, and TASS