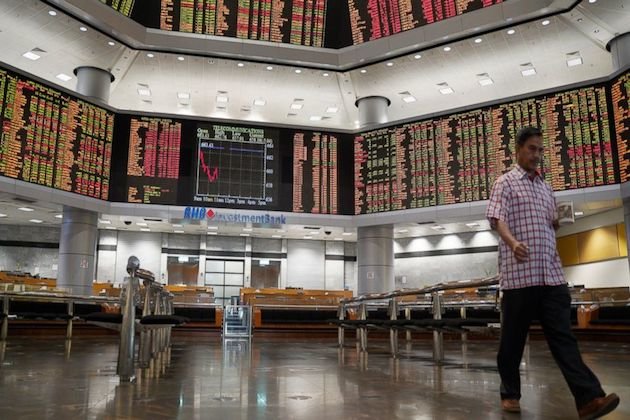 The euro fell sharply as concerns over the European economy lingered. Interest rates fell as treasuries continued to be sold off. Positive retail data howlped helped moderate the sell-off,

"You've an environment where we're digesting the move down in interest rates and the yield curve yesterday," Darrell Cronk, chief investment officer for Wells Fargo Wealth and Investment Management in New York told the Reujters Thomson news agency. "Volume is lighter today. You're not getting outsized movements one way or the other."

"One thing the market took solace in today is better U.S. economic data," Cronk added. "That helped to calm some of the fears from yesterday."

Continuing fears over the U.S.-China trade dispute kept investors wary. China hit back Thursday saying it would retaliate to the latest round of tariffs being imposed by the U.S., about half of which will apply from 1 September. China made an effort Thursday to get the U.S. to meet it half-way in resolving the dispute, however U.S. President Donald Trump, when asked about this said "any deal must be on our terms."

Japanese stocks fell, however in China there were small advances registered.

Heads of state and government from dozens of countries arrived in Jerusalem to mark the 75th anniversary of the liberation ...

GENEVA, Switzerland (ANI/Sputnik) - The WHO Emergency Committee held a discussion on Wednesday over concerns about the coronavirus outbreak in ...

Senate approves impeachment rules after being rebuked by chief justice

OUAGADOUGOU, Burkino Faso - (ANI/Sputnik): Thirty-six civilians were killed on Monday in an attack on a market in Sanmatenga province, ...

SYDNEY, Australia - Stocks in Asia fell sharply on Thursday as the death toll from the Wuhan coronavirus rose to ...

SYDNEY, Australia - Stocks in Asia rebounded on Wednesday, clawing back some of the extensive losses of a day earlier.The ...

NEW DELHI, India: At least five flights were diverted from the Delhi Airport due to bad weather on Wednesday morning."Five ...

Deathdream (aka Dead of Night)