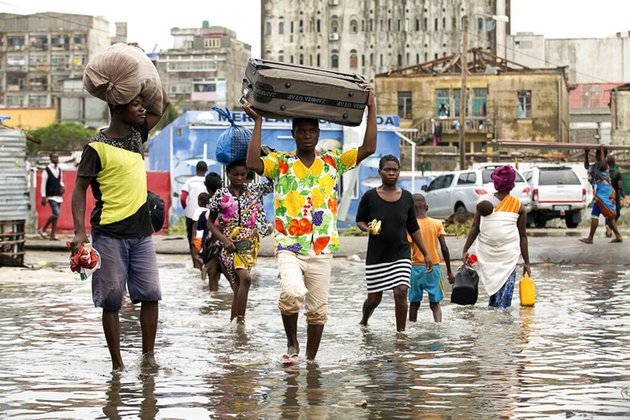 Cyclone Idai, a tropical cyclone that hit Mozambique, Zimbabwe and Malawi, is not a natural disaster but a direct consequence of the white, Western system of ecological assault for profits, Black First Land First (BLF) said in a statement on Friday.

"BLF holds that the destroyers of the ecological balance, through Greenhouse gas emissions, must pay for the catastrophe that is caused by their gluttonous cultures and civilisation of death.

"The multitudes that died as a result of the cyclone are not victims of a natural disaster. This is mass murder which could be prevented if the West abandoned its ways," the statement read.

On Monday, Mozambique's President Filipe Nyusi said more than 1 000 people may have by killed in the aftermath of the cyclone, which has been described as the worst in more than 20 years, News24 reported.

International Relations and Cooperation Minister Lindiwe Sisulu told Parliament on Wednesday that the Southern African Development Community (SADC) is and was "completely unprepared" for Cyclone Idai and other natural disaster events of this magnitude.

BLF, however, blamed the Western world for the disaster that has had a far-reaching and disastrous effect on the region.

The West pollutes and the West must pay

"Those who pollute and destroy our ecosystems must pay ecological reparations to those who suffer as a consequence of their irresponsible actions. It's no longer speculation - even the white man's own science corroborates what we blacks know: Africa is paying a heavy price for the actions of the white world. The West pollutes and the West must pay.

"Part of driving their conspiracy of recolonisation is to profit from disasters. The West has no incentive to stop destroying our planet. The West knows only one value and that is to make profits. If the West is not stopped soon, then we should prepare for the extinction of our species," BLF said.

BLF called on the African Union (AU) to demand reparations and relief from the European Union (EU) and the US for Cyclone Idai.

"Africa is tired of carrying the burden of the destructive behaviour of the global white system of power and consumption," the statement read.

On Friday, BBC reported that rescue workers were continuing the search for survivors of Cyclone Idai, which destroyed towns and villages in its path.

"Hundreds of people have been killed and hundreds of thousands more have been affected by what the UN says could be 'one of the worst weather-related disasters ever to hit the southern hemisphere'," its report stated.

For first time in US, hearing aids to be sold over the counter

WASHINGTON D.C.: A proposal by health officials in the United States will allow the public to purchase non-prescription hearing aids, ...

HAIFA, Israel: A 900 year-old sword, believed to have belonged to a Crusader who sailed to the Holy Land, was ...

First movie in space filmed by Russians in Space Station

MOSCOW, Russia: A Russian film crew has returned to Earth from the International Space Station after spending two weeks filming ...

Chile at beginning of new era

Washington: states can order Covid vaccines for kids over 5 years

WASHINGTON D.C.: US health officials have notified states that they can now order doses of COVID-19 vaccines for younger children, ...

NEW YORK, New York - U.S. stocks were mixed on Friday with the Dow Jones advancing, while the Nasdaq Composite ...

WASHINGTON D.C.: U.S. power companies are increasing their coal consumption due to surging natural gas prices, dealing a blow to ...

To refinance after bankruptcy, Hertz files for IPO

WASHINGTON D.C.: Rental car company Hertz, which filed for bankruptcy early in the pandemic, emerging on 30th June, has filed ...

SYDNEY, NSW, Australia - Stocks were little moved on Asian markets on Friday, although the tech sector showed some buoyancy."The ...

Electricity cutbacks in China as price of coal soars

BEIJING, China: Throughout the world, countries are suffering from the disruptions of global supply chains.A growing list of commodities and ...

The Night of the Hunter

Night of the Hunter