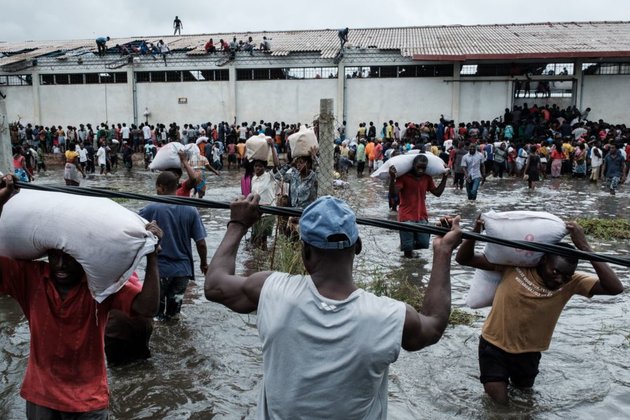 The Red Cross says it its deploying two major emergency response units to the port city of Beira in Mozambique to provide services for thousands of people affected by last week's Cyclone Idai, one of the most destructive storms to hit southern Africa in decades.

One unit is expected to provide basic sanitation facilities for up to 20,000 people, while the other is expected to produce as much as 225,000 liters of clean water each day enough to help 15,000 people struggling to survive the massive flooding that has followed the storm.

Jamie LeSueur, head of Red Cross operations in Mozambique, said in a statement that aid workers are most concerned about preventing the spread of waterborne disease. She said the emergency response deliveries will help protect against that.

'More help is needed, and we are continuing to do all we can to bring in more resources and reach more people,' she said.

Helicopters are conducting food drops over villages that were destroyed and cut off from the outside world after the cyclone hit Mozambique's port city of Beira, then swept inland to neighboring Zimbabwe and Malawi. Aid officials say an untold number of survivors are clinging to tree tops or are trapped on rooftops of houses that remain submerged by flood waters.

Idai carried sustained winds of up to 170 kilometers an hour, making it one of the most destructive storms to strike southern Africa in decades.

The combined death toll in Mozambique, Zimbabwe and Malawi has risen to more than 300 people, a number which is expected to climb as the flood waters recede and search crews finally enter the damaged areas. President Filipe Nyusi of Mozambique has said he expects the death toll to exceed 1,000 in his nation alone. Mozambique began three days of official mourning Wednesday.

Aid agencies said they prepared for the cyclone but not the massive floods that followed. Mozambique was hardest hit as a result of rivers flowing downstream from its neighbors.

The U.N. World Food Program said it was transporting enough aid for 600,000 people across the three nations. The U.N. said it has allocated $20 million from its central emergency response fund and urged other donors to contribute. The European Union announced an initial aid package for the storm-stricken countries valued at nearly $4 million. Britain and the United Arab Emirates have also promised aid.

The U.S. State Department said the United States is supporting relief efforts 'in coordination with our partners.'