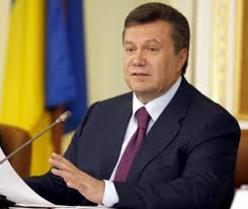 Provisions of the deal include returning to the 2004 constitution, which would decrease the powers of the president and increase those of the parliament, setting up a national unity government within 10 days and holding early presidential election later this year.

Following all-night talks between representatives of his government and the opposition, brokered by the foreign ministers of Germany, France, and Poland, President Yanukovych announced he would hold early elections, form a coalition government, and make constitutional changes.

After inking of the agreement, Ukraine's parliament voted to restore the 2004 constitution. It also voted to remove Interior Minister Vitali Zakharchenko, who is seen by the opposition as responsible for the killing of dozens of anti-government protesters.

The parliament also voted to free former Prime Minister Yulia Tymoshenko from prison by decriminalizing the article in the criminal procedural code under which she was convicted.

A constitutional majority of 310 lawmakers from a cross-section of different parties, including the Communists, voted for the measure. President Yanukovych is widely blamed for ordering the imprisonment of his political rival.

Tymoshenko, who was jailed in 2001 under "abuse of office" charges, is a popular figure with protesters. Her imprisonment has been previously condemned by the European Union.

It has been reported that her health has been deteriorating whilst in jail, and it is unclear when she will be released. She is in a penitentiary in the eastern city of Kharkiv since August 2011

The English-language website of The Kyiv Post quoted a lawyer for Tymoshenko, Serhiy Vlasenko, as saying that prosecutors must now file a petition to the court to release her, and the process could take two weeks.

Tymoshenko also would be able to run for office, since she would have no criminal record.

The bloody clashes were sparked off in late November by the president's shift toward closer relations with Russia. Yanukovych spurned a trade and political agreement with the European Union and tilt his nation toward Russia instead.

At least 77 people have been killed this week in the worst violence since the Ukraine emerged from a dismembered Soviet Union in 1991.

The White House welcomed the agreement.

"We support the efforts of all those who negotiated this agreement, commend the courageous opposition leaders who recognized the need for compromise, and offer the support of the United States in its implementation," it said in a statement Friday. "Now, the focus must be on concrete action to implement this agreement, which we will be monitoring closely."

Asteroid size of a bus comes close to Earth

Scientists at the U.S. space agency NASA say a small asteroid - roughly the size of a bus - passed ...

One of New York's finest accused of spying for China

Why Biden should not pick Michele Flournoy as defense secretary

If the Democrats manage to push Joe Biden over the finish line in November's election, he will find himself presiding ...

UK restaurants and pubs brace for fallout from new restrictions

An employee arranges products to be exported to Russia at a food processing company in Suifenhe, northeast China's Heilongjiang Province, ...